Eat Healthy to Ward Off Depression 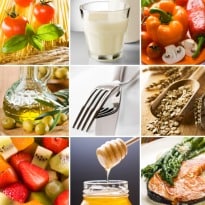 A healthy diet that includes fruits, vegetables, whole-grains, fish and low-fat cheese, may reduce the risk of severe depression, a new study has found.On the other hand, high intake of junk food, sugar and processed meats may increase depressive symptoms, scientists claim.

Researchers at the University of Eastern Finland, in a study of more than 2,000 men found that healthy diet was associated with a lower prevalence of depressive symptoms and a lower risk of depression during the follow-up period of 13 years.

"The study reinforces the hypothesis that a healthy diet has potential not only in the warding off of depression, but also in its prevention," said Anu Ruusunen, who presented the results in her doctoral thesis in the field of nutritional epidemiology.

Depressed individuals often have a poor quality of diet and decreased intake of nutrients. However, it has been unclear whether the diet and the intake of foods and nutrients are associated with the risk of depression in healthy individuals.

Researchers found that adherence to an unhealthy diet characterised by a high consumption of sausages, processed meats, sugar-containing desserts and snacks, sugary drinks, manufactured foods, French rolls and baked or processed potatoes was associated with an increased prevalence of elevated depressive symptoms.

Comments The study was based on the population-based Kuopio Ischaemic Heart Disease Risk Factor (KIHD) Study. The participants were followed-up for an average of 13 years.