Energy Drinks May Leave You Sleepless 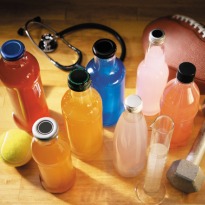 The side-effects of energy drinks have been questioned by health experts time and again. First, they were considered unhealthy due to the caffeine content. Then, a previous study discovered how excess consumption of energy drinks can lead to serious heart problems by changing your heart rhythm. And now, a recent study claims that they may also cause insomnia and nervousness.

The study appeared in the British Journal of Nutrition. It was carried out by experts from the Camilo Jose Cela University (UCJC) in Spain to evaluate the positive and negative effects of energy drinks on athletes.

For the study, sportsmen from various fields (football, basketball, rugby, volleyball, tennis and hockey players) consumed three cans of an energy drink or an energy drink placebo before a sports competition. The athletes were questioned about how they felt after consuming these drinks and the frequency of the side-effects that they experienced was measured. The findings showed that energy drinks increased their sporting performance by three to seven percent but at the same time, they also led to certain side effects.

"Athletes felt they had more strength, power and resistance with the energy drink than with the placebo drink. However, the energy drinks increased the frequency of insomnia, nervousness and the level of stimulation in the hours following the competition" said Juan Del Coso Garrigas, In-Charge of the Exercise Physiology Laboratory at UCJC.

The authors noted that most energy drinks mainly contain carbohydrates, caffeine, taurine and B vitamins, with little difference in ingredients amongst the popular brands. Del Coso explains that none of the other ingredients actually affect your physical or mental performance. Energy drinks do not provide more energy than other soft drinks, but they do have an "energizing" effect related to the stimulation provided by caffeine. The concentration of caffeine (32 mg/100 ml of product) present in energy drinks provides a total of 80 mg of caffeine per 250 ml can. (More: Caffeine Compared - From Soft Drinks to Coffee)

Promoted
Listen to the latest songs, only on JioSaavn.com
According to Health Food Manufacturers' Association in Britain, caffeine can prevent the body from absorbing essential minerals, especially iron. This may lead to iron deficiencies especially in young women. Besides this, previous studies have linked energy drinks to an increased risk of alcohol poisoning. While high levels of sugar and caffeine have always been a problem, some studies suggest that consumption of energy drinks may act as a gateway to alcohol and drugs.

It can be concluded that energy drinks may provide a temporary boost but they may leave you with long-term health risks.