Forest Bathing is the Latest Fitness Trend to Hit U.S. 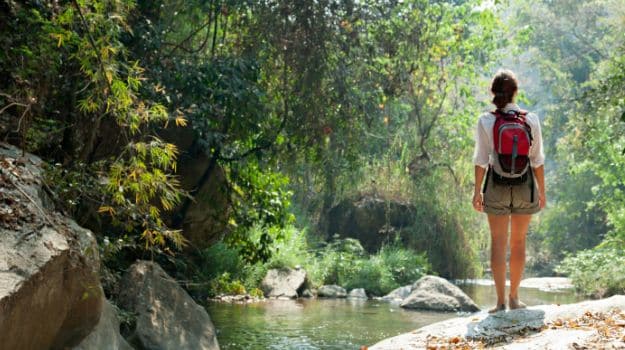 Over thousands of years of human history, we have effectively become an indoor species. Particularly for those of us trapped in the cubicle life, often the only times we regularly step foot outside is for our daily work commute or to run errands. In 2001, a survey sponsored by the U.S. Environmental Protection Agency found that, on average, Americans spend 87 percent of their time indoors and 6 percent in an enclosed vehicle.

However, a number of scientific studies emphasize that reveling in the great outdoors promotes human health. Spending time in natural environments has been linked to lower stress levels, improved working memory and feeling more alive, among other positive attributes.

In an effort to combat our indoor epidemic and reap these health benefits, a growing number of Americans have become followers of a Japanese practice called Shinrin-yoku. Coined by the Japanese Ministry of Agriculture, Forestry and Fisheries in 1982, the word literally translates to "taking in the forest atmosphere" or "forest bathing" and refers to the process of soaking up the sights, smells and sounds of a natural setting to promote physiological and psychological health.

The increasing popularity of Shinrin-yoku, particularly in California, echoes the adoption of other East-to-West health trends, such as yoga and meditation. And like these activities, forest therapy can be a guided, paid-for experience or freely performed solo.

"I think about where yoga was 30 years ago and where it is today, and I realize that forest therapy is making the same journey toward cultural definition in a way that will mainstream the practice," said Ben Page, a certified forest therapy guide who founded Shinrin Yoku Los Angeles. He recently returned to his home in Southern California after training a cohort of forest therapy guides toward certification in Sonoma County - a week-long program popular enough to have a waiting list.

Those that practice Shinrin-yoku explain that it differs from hiking or informative nature excursions because it centers on the therapeutic aspects of forest bathing.

"So whereas a nature walk's objective is to provide informational content and a hike's is to reach a destination, a Shinrin-yoku walk's objective is to give participants an opportunity to slow down, appreciate things that can only be seen or heard when one is moving slowly, and take a break from the stress of their daily lives," Page said.

For instance, a 2010 study using data from field experiments conducted in 24 forests across Japan found that subjects who participated in forest bathing had lower blood pressure, heart rate and concentrations of salivary cortisol - a stress hormone - when compared with those who walked through a city setting. Studies performed in other countries, such as Finland and the United States showed similar reductions in tension and anxiety.

"There have been studies comparing walking in nature with walking in an urban environment and testing people on their mood, different aspects of depression, and in some cases, brain scans," said David Yaden, a research fellow at the University of Pennsylvania's Positive Psychology Center. "In the natural setting, people are more relaxed and less stressed."

People on nature walks also tend to engage in less rumination, or negative self-referential overthinking, which has been correlated with depression.

Other studies have found an association between Shinrin-yoku and a boost in immune function. Subjects took a 3-day/2-night trip to forest areas in Japan with researchers taking blood and urine samples before and after the excursion. The numbers of natural killer cells - a type of white blood cell that fights infected or tumor cells - and other immune system markers were significantly higher after forest bathing than before. Participants' natural killer cell activity rose about 50 percent throughout the trip, while their urinary adrenaline concentration showed a decrease.

"In Japan, Shinrin-yoku trails are certified by a blood-sampling study to determine whether the natural killer cell count is raised enough for the trail to qualify," Page said. "I should also note that in Japan and Korea, forest therapy modalities are integrated into their medical system and are covered by insurance."

Some researchers attribute Shinrin-yoku's health benefits to substances called phytoncides, which are antimicrobial organic compounds given off by plants. They argue that by breathing in the volatile substances released by the forest, people achieve relaxation. However, phytoncides - colloquially known in forest bathing circles as "the aroma of the forest" - only exist in small concentrations out in the field as compared with the amounts given to subjects in laboratory-based olfactory studies.

Another possible explanation for forest bathing's soothing effects involves our sense of awe when viewing natural beauty. Yaden, who recently published a study on the awe experienced by astronauts viewing Earth from space, explains that both perceptual (e.g. admiring a tall grove of trees or the Grand Canyon) and conceptual vastness (e.g. trying to wrap your mind around the Big Bang) can inspire awe in humans.

"We describe in the paper that this particular view of Earth produces both types of vastness - perceptual vastness of this sweeping view of the planet, but conceptual vastness of everything that the planet means to us as human beings," Yaden said. Taking in the sights, sounds and smells of a forest could potentially arouse similar feelings of awe that have been linked to improvements in certain markers of good health.

While the exact mechanisms of Shinrin-yoku remain largely unknown, the practice itself continues to spread - perhaps as a backlash against modern society's obsession with indoor-use technology and office culture. Amos Clifford, a wilderness guide based in the San Francisco Bay Area, founded the Association of Nature and Forest Therapy in 2012. For a tuition fee, the organization offers forest therapy guide certification programs. Besides U.S.-based training in Northern California and Massachusetts, others are scheduled for next year in Canada, Ireland, New Zealand and South Africa.

"I think of it like a tree growing," Page said. "It is still a young practice, but there are new branches forming all the time."