9 Incredible Benefits of Walking: Why it's Great for Your Health and Well-Being 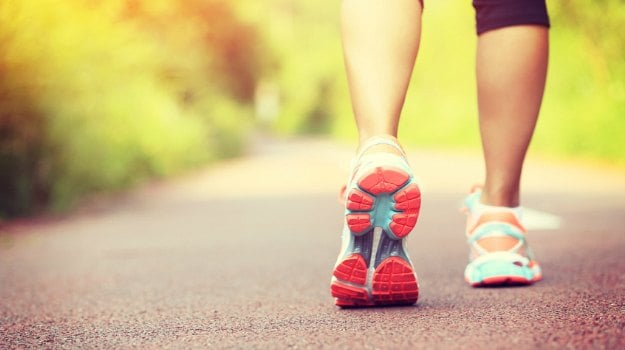 Long walks help you clear your head, pace your thoughts and calm you down, figuratively speaking. The benefits of walking seem so obvious that they're rarely discussed. We forget how it's great exercise that also helps you tone your legs, shed the extra weight and doesn't need you to have an exclusive gym membership. It quickens your heart beat, circulating more blood and oxygen to your muscles and your organs, including the brain. Experts suggest that brisk walking for 30 minutes at a moderate speed can help you burn 150 to 200 calories.

And walking isn't all sports shoes and parks. During the day, you can also get up from your desk every hour or so and walk around your office or block for two whole minutes. The benefits of intense exercise are undeniable, of course, but even a few steps daily can take you a long way.

It's obvious that regular walking helps you lose weight but you must also know that the speed at which you walk could make all the difference. Researchers from the University of Virginia found that women who did three shorter but fast-paced walks in a week lost five times more belly fat than those who strolled five times a week. And that's not all, high intensity exercise also helps you lose three times more visceral fat which is the one wrapped around your organs like liver and kidneys and has often been linked to heart disease and diabetes.

Over the last few years, researchers have spent a lot of time and resources to figure out how walking helps, how swift or slow you should walk and it helps bring a certain kind of rhythm to your life that no other form of exercise can.

1. Less likely to suffer a stroke and other cardiovascular problems

According to a study by the Harvard Medical School, walking for just 2.5 hours a week, which is 21 minutes a day can cut the risk of heart disease by 30%. In fact, it even goes on to say that walking regularly could save Americans over 100 billion dollars a year in health care costs. A 2009 issue of Harvard Men's Health Watch reported that walking is seriously underrated. Two scientists sifted through 4295 articles published on walking between 1997 and 2007. 18 of these met their high standards for quality. Each of these studies collected information about the participants walking habits and cardiovascular risk factors such as age, smoking and alcohol use. The participants were followed for 11.3 years and during this time their cardiovascular events and deaths were recorded. When scientists compiled this data, they found that walking reduced the risk of cardiovascular events by 31% and cuts the risk of an early death by 32%.

Walking can lead to a healthy heart

Some might say that walking is the easiest form of exercise. That is untrue because you should not really be strolling but walking at a fairly fast speed and secondly, it can actually help you lose weight. A University of Utah study in 2014 found that in women, every minute of brisk walking throughout the day could lower the risk of obesity by 5%. Harvard School of Public Health found that walking could cut the effects of obesity-promoting genes by half.

According to the American Diabetes Association walking is a great way to curb diabetes. You should start out with a 3 to 5 minute slow-paced walk and then stretch for 5 to 10 minutes followed by a walk at moderate speed. Make sure you keep your spine straight and your chin up. On some days you can choose to indulge in shorter walks and on others push yourself to brisk walk. James O. Hill, PHD from the University of Colorado at Denver writes that a modest change in one's schedule like making time for walking can make a significant change in the life of a type 2 Diabetes patient, reducing overall healthcare costs. To see good results, you can start out with 30 minutes or 2400 steps a day and take it up to 77 minutes or 6400 steps a day.

A study published in the journal Cancer Epidemiology, Biomarkers & Prevention, and conducted by the American Cancer Society found that walking up to 7 hours a week reduces the risk of breast cancer itself by 14%. The sample size of this group was a large 73,600 and was done over two decades, making the results of this study even more credible.

6. Exercise can boost your memory

Exercise is good for the brain but walking in specific is good for boosting your memory. A 2011 study published in The Proceedings of the National Academy of Sciences showed how walking for 40 minutes at a stretch three times a week could increase the volume of the hippocampus by 2%, which is fairly significant. Another study that was presented at the 2014 annual meeting of the American Association for the Advancement of Science, regular brisk walks can slow down the shrinking of the brain and the faltering mental skills that old age often bring. The study was done with men and women between the ages of 60 and 80 and it concluded that taking a short walk three times a week increased the size of that part of the brain linked to planning and memory.

Walking can spike up your memory retention

Promoted
Listen to the latest songs, only on JioSaavn.com
According to a study done at Appalachian State University in North Carolina, a moderately-paced walk for about 30 to 45 minutes daily can increase the number of immune system cells in your body and over a period of time, it can have really remarkable effect on your body's ability to fight disease. To be more specific, walking at least 20 minutes a day could reduce the risk of getting sicker by almost 43%.

A 2014 study published in the Journal of the American Medical Association showed how walking from an early age can help you stay mobile and independent during old age. The sample size included people between the ages of 70 and 89. After 2.5 years, researchers found that the group of adults which exercised regularly were 28% less likely to become disabled and also 18% less likely to have any episode of physical disability.

Comments Walking is one of the best ways to kick your stress eating habits to the curb. It doesn't work in isolation though. The ideal way to beat a stress eating disorder it to meditate, get good sleep and walk around 10,000 steps a day. Experts believe that stress eating is more often a symptom of an emotional or psychological problem. Walking releases endorphin into your system and reverses the cortisol levels in your body, helping you curb stress eating.