How to Keep Your Brain Sharp as You Age 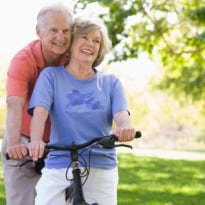 Old age comes with its own set of inevitable problems and one of them happens to be the rate at which the brain functions. Certain parts of the brain, especially the area of the frontal lobe (prefrontal cortex) and the hippocampus start to shrink. Both these areas are key to learning, memory and other complex mental activities which is why any bit of information that suggests how to improve brain function is of great importance. (More: Turmeric May Help Treat Brain Disorders)

Some degree of decline in cognitive function is common in old age which is why experts stress on the need for brain exercises. But is that enough? According to a study published in the journal PLOS ONE, exercise does more than enhance physical health. It helps the brain stay sharp. Researchers found that physical activity in old age may prevent a decline in the brain's white matter. The study was conducted at the University of Illinois where researchers observed 88 people between ages 60 and 78 who had low cardiovascular fitness but were otherwise healthy. The participants wore accelerometers for a week to track their daily physical activity, as well as how much time they spent sitting. (More: Yoga Boosts Brain Power in Older Adults)

Researchers examined the brain scans of the participants to look at how structurally sound the white matter was. White matter is composed of fibre-like parts of brain cells that enable communication between brain regions. A 'Live Science' report said that researchers looked for lesions called "white matter hyperintensities," which are common in older people and found that the more people engaged in moderate or vigorous exercise, the fewer white-matter lesions they had.

Promoted
Listen to the latest songs, only on JioSaavn.com
The findings suggest that increasing physical activity and avoiding a sedentary lifestyle could be beneficial for brain health. Researchers also found that light physical activities, such as housework and gardening, were related to how structurally sound people's white matter was in some parts of the brain. The more people engaged in light physical activities, the more structurally sound their white matter was in the temporal lobe, a part of the brain that lies behind the ears and is involved in memory and language.

In contrast, the more time people spent sitting, the more they showed lower structural soundness in the white-matter tracts connecting the hippocampus, a brain area important for learning and memory.