Hypertension In Kids Isn't Rare, But Experts Are Unsure How Best To Handle It 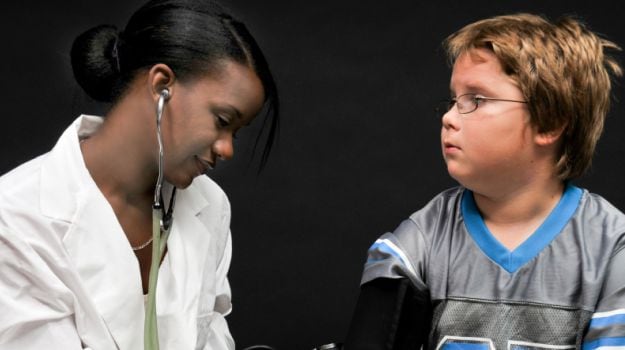 High blood pressure is, for many people, a wake-up call to make challenging lifestyle changes such as exercising more, eating better and possibly taking medication.When the patient is a child, the diagnosis can bring tougher decisions.

About 7 percent of kids between the ages of 3 and 18 have elevated blood pressure, also called hypertension or pre-hypertension. And that number seems to be growing - with particularly high rates among overweight and obese teenagers.

But data is still scarce about how best to treat high blood pressure in kids, and even how to assess it.
"The condition is frequently missed when it's there and diagnosed when it's not. When diagnoses are confirmed, it's still not clear what the long-term consequences might be of taking medication for decades, with some studies suggesting that half of cases will resolve on their own," says Margaret Riley, a family physician at the University of Michigan Health System in Ann Arbor. As a result of these uncertainties, experts disagree about how often kids should undergo blood pressure testing and even whether they should be tested at all. In a less contentious form, it's the young person's version of the debates over mammography and PSA testing for breast and prostate cancers.

"Common sense says that if you diagnose and treat high blood pressure early, it will help," Riley says. "But we don't know if treating will lead to improved outcomes. That's where the controversy is."
Blood pressure is a measure of how hard the heart has to work to pump blood. For adults, the target numbers are 120/80 mm Hg. Above that, pre-hypertension is a warning sign. Over the 140/90 level, prolonged hypertension can lead to heart attacks, strokes, kidney damage and other problems.
In kids, the numbers are more complicated to interpret. Blood pressure starts out comparatively low in small children and rises as they grow. But "normal" varies by age, gender, body size and time of day.

Anxiety matters, too. In one study, more than half of kids showed signs of "white coat hypertension," with a spike in blood pressure at the doctor's office.

Some kids get more opportunities than others to exhibit false positives. The National High Blood Pressure Education Program recommends that children get screened every time they are seen in a medical setting, starting at age 3. Other organizations, including the American Academy of Pediatrics, have recommended screening once a year during preventive well-child visits. But after a rigorous analysis in 2013, the U.S. Preventive Services Task Force, or USPSTF, concluded that there was insufficient data to make any recommendation about the relative benefits and risks of screening kids for hypertension.

In practice, many kids miss out on testing altogether, either because they don't get well-child appointments or because their doctors don't follow the guidelines. In one 2012 study, kids were screened in about two-thirds of preventive visits and one-third of other office visits.
Even when their blood pressure is taken, results are easy to misinterpret. A cuff of the wrong size can skew numbers. And doctors don't always look closely at those numbers, which can be plugged into complex tables that indicate hypertension if a kid is in the 95th percentile or higher compared with other kids of the same age, height and sex. Readings above the 90th percentile qualify as pre-hypertension.

"As clear as mud," my family pediatrician answered during my 8-year-old's recent annual visit when I asked him about figuring out what to make of blood pressure readings in kids. Those layers of complication make the condition easy to miss in young people. In a 2007 study of more than 14,000 children, only 26 percent of those with high blood pressure had been diagnosed in the course of routine office visits.

When doctors do catch the condition in very young children, it's usually a sign of some other cause that can be sleuthed by a full work-up of tests to look for such things as heart defects, hormonal problems and kidney disease.

By the time kids hit adolescence, though, between 85 and 95 percent of cases are not linked to another condition, and many experts think body weight is a big part of the problem. An estimated 11 percent of obese children have high blood pressure, according to the USPSTF, and some studies have put rates of hypertension as high as 30 percent in certain groups of obese teens.

In one large 2013 study, blood pressure levels above the 90th percentile showed up in 19 percent of boys and 12 percent of girls ages 8 to 17. Hypertension and pre-hypertension were most common in kids who ate more than the recommended amount of sodium, says study co-author Bonita Falkner, a pediatric nephrologist at Thomas Jefferson University in Philadelphia.

Studies have yet to look at whether high blood pressure in childhood leads to cardiovascular problems later in life. But there are reasons to be concerned, Falkner says. According to a number of clinical studies, teens with hypertension show signs of heart stress, including thickening of certain parts of the heart and structural changes in the blood vessels. Kids with hypertension may even score worse on challenging brain tasks. Some evidence also suggests that high blood pressure becomes more likely in adulthood when it starts in adolescence.

When hypertension coincides with excessive weight, Falkner says, the best first step is to try to lower blood pressure by helping kids develop better eating and exercise habits. The next step is medication. And options include the same kinds of drugs that adults use, including beta blockers and ACE inhibitors.

Still, there have been no long-term trials in children to compare classes of drugs or to assess the safety or effectiveness of taking these drugs indefinitely. And, Riley adds, it's impossible to predict which kids' conditions will resolve on their own.

Promoted
Listen to the latest songs, only on JioSaavn.com
"Nobody knows if treatment long term will lead to decreased numbers of heart attacks and strokes," she says, adding that she wouldn't hesitate to treat a child with medication if needed or to try to wean him off medication after a while. "Kids are not followed long enough. To avoid a run-in with hard treatment decisions, experts recommend teaching kids heart-healthy habits from the get-go - and getting the whole family involved."I think the best advice for parents is to try to model a healthy lifestyle and have kids live as healthy a life as possible," Riley says, including plenty of fruit and vegetables, no sugar-sweetened drinks and at least an hour of physical activity and less than two hours of screen time each day. "They are general guidelines for health that also relate to blood pressure."