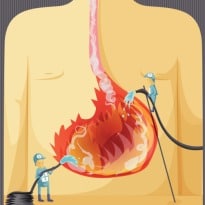 Did you know that your child's recurring throat infection could be because of acidity? For reasons that are lifestyle-related and, therefore, well within our control, occurrence of acidity among youngsters is rising steadily and should be addressed with a visit to the doctor if it hampers daily life to avoid its long-term implications.

A gastroenterologist at the Apollo Hospital, Ajay Kumar, attributes this rising trend among young children to their daily routine. "A school-going kid has an early breakfast, which he or she eats half-heartedly because of time constraints. After a long break it's tiffin time, but he or she hardly eats from the lunchbox, preferring to eat from the canteen instead," he explained.

"It's seen that a lot of mothers try to pack appetising food for their children, like fried cutlets, or even a packet of chips. At the end of the day, you have moved from a high- fibre diet to a high-calorie diet. Obesity in kids therefore is rising, as also are cases of acidity," Ajay Kumar told IANS.

It's a similar story for professionals. Long gaps between meals, junk food, no physical exercise and odd working hours all add to giving one that burning sensation in the stomach.

"Stress also plays a big role in causing acidity. It accentuates the problem," Deepak Lahoti, head of the gastroenterology department at Max Hospital, Patparganj, told IANS. A job that always keeps you on the tenterhooks or a gnawing problem at home can, therefore, also lead to acidity.

What's more, smoking and alcohol, both of which are increasingly becoming an accepted norm in society, can cause an acid reflux.

According to Lahoti, the symptoms of acidity may not always be frequent burps and a burning sensation in the stomach. "In children, for instance, if there is a recurring throat infection, it could be because of acidity because the reflux can go high up to the tonsillar region. Complaints of food being felt stuck in the chest region, or slight bleeding with vomiting can all be caused by acidity."

Taking antacids over the counter, doctors say, is all right, unless the problem starts hampering your daily life.

"Having acidity once in three-four weeks and then taking an antacid is Ok. But if it becomes a daily affair and starts hampering your routine, you should see a doctor," said gastroenterologist Rajni Mehta, who practises at a number of private hospitals in the national capital. "Adults who are on painkillers are vulnerable to frequent acidity problems."

Listen to the latest songs, only on JioSaavn.com
"If you are in the 40-50 age bracket and develop fresh symptoms like loss of weight, loss of appetite, blood in vomit, black stools, fall in hamoglobin level - all of which we call red flags - one should see the doctor and go for investigations," Ajay Kumar said.

A recurring acidity problem, despite acid suppressants, can lead to vitamin deficiency. "Also, as WHO has stated, frequent acid reflux can be carcinogenic. Which means, if it remains uncorrected, frequent acidity can lead to cancer of the esophageal pipe," Lahoti pointed out.

Comments Since in most cases acidity is lifestyle-related, the best way to avoid the problem is to take small, frequent meals, go for regular exercise, and avoid eating excess in one go, be it fried food, ice cream or candies. "And ultimately, try and observe what causes the problem for you, and avoid that," Lahoti added.