Meet the Man Who Purifies Your Vegetables 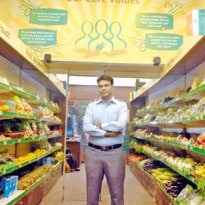 An engineer's quest to find clean vegetables has given Mumbai a first-of-its-kind store which purifies fruits and veggies before selling them. Kareena N Gianani walked into Fresco, met its founder Karan Gaba and found out the technology, which involves ozonation, works.

Every morning, at 4.30 am at a workshop in Santacruz, a group of people try to undo what you suspect your local subziwaala would otherwise do best -- wash your vegetables with filthy water and store them in places with dubious levels of hygiene. Here, at the workshop, workers work in batches and haul over 750 kgs of vegetables in a washing machine, though of a very different sort. Tomatoes, bell peppers, lemons and bottle gourds are placed in the pre-wash machine and, when the power is turned on, the vegetables are washed with the help of water currents.

Karan Gaba, owner of Fresco, treats vegetables and fruits with ozone to purify the produce. Vegetables are first washed with water and then transferred into a machine called Advance Direct Contact Quarantine (below) where ozone technology is used to purify them. Pics/Nimish Dave

The vegetables are then taken out and arranged in a tall rack - and here's is where the unusual part of the process comes in. Twenty-eight-year-old Karan Gaba, the man behind Fresco, instructs his team to wheel the veggies inside an electronic enclosure, around 8x4 feet and locks it. He presses a few buttons and we wait for about seven minutes, occasionally peering through the glass while the machine soundlessly does its job.

The vegetables look the same when they come out, but they have now been purified with ozone technology. The machine, conceptualised and designed by Gaba, is called the Advance Direct Contact Quarantine (ACDQ). The machine, with perforations visible on all four walls, ozonises the air inside -- which simply means that oxygen molecules are converted into ozone (made of three oxygen atoms). "Ozonisation purifies the vegetables against pesticides and harmful bacteria such as E Coli and salmonella. It is also free from the wax some vendors use to polish fruits to give them sheen."

As the vegetables are sealed and packed in different quantities, Gaba tells us about how he went from the guy who had never been to the local market to someone who is perhaps the only person in the country who is 'purifying' food. After Gaba completed his engineering at Thadomal Shahani Engineering College in 2006, he began toying with the idea of getting into organic farming.

That, however, didn't work out and he began thinking about food purification after he noticed that his mother struggled with the produce available in the local market. "Ever so often, my mother would hold a vegetable or fruit up to us and complain about its quality, texture, or the amount of dirt on it. She was never sure of where it came from, and in turn, what exactly the family was eating. That really got me thinking about a process that could purify raw vegetables. Water purifiers are common in households, but what about the food we eat?"

Promoted
Listen to the latest songs, only on JioSaavn.com
To find an answer, he began working on a food purification machine. By 2010, Gaba began designing and producing small ozonisation machines for domestic use, priced at Rs 5,500. "I sold about 500 of them, and charged an annual maintenance fee of Rs 150." Soon after, he decided to design a larger machine with more capacity and get into food purification himself. In February 2012, Gaba opened Fresco, a Bandra-based store which sells fruits and vegetables purified by his machine. Fresco has around 700 registered customers, which includes six local restaurants and the Ashok Academy School in Andheri. Gaba's food technology has been certified by Intertek, Microchem Silliker, Haffkine Institute and is recommended by the Indian Medical Association for Food Safety.

The vegetables from Gaba's store don't cost clients a fortune either, he says. "Tomatoes, for instance, cost anything between Rs 22 to Rs 26 in the market, and Fresco charges Rs 24 a kilo. Bell peppers cost between Rs95-130 outside; we sell it for Rs 99 a kilo. Apples cost Rs170-220 in the market, but at Fresco, it costs only Rs 159."

Comments Gaba admits he has an advantage in the field where no other company or individual is really into vegetable and fruit purification. "But it wasn't easy at first, it still isn't -- I often got fooled at the wholesale market and had to learn from scratch. For instance, I learnt that over 40 varieties of tomatoes are sold in the city. It has taken me a year to set things in order and now, I think I am ready to expand by building a bigger machine, a lot more of them. I'd also like to open more stores around the city, especially in the central suburbs," he says.