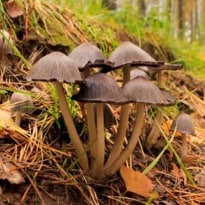 According to a new research published in the journal Chemistry and Biology, toxic mushrooms may hold secrets to tackling deadly diseases such as cancer. A team from Michigan State University has discovered an enzyme that is a key to the lethal potency of poisonous mushrooms. The results show the enzyme's ability to create mushroom's molecules that harbour missile-like proficiency in attacking and destroying a single vulnerable target in human liver.

The team unveiled how the enzyme contributes to the manufacture of chemical compounds known as cyclic peptides - a type of molecule that pharmaceutical companies use to create new drugs. These findings could lead to single-minded medicines with zero side effects, said Jonathan Walton, professor of plant biology and co-lead author.

"Mushrooms are prolific chemical factories, yet only a few of their peptides are poisonous," he said. "These toxins survive the high temperatures of cooking and the acids of digestion, and yet they are readily absorbed by the bloodstream and go directly to their intended target. These are the exact qualities needed for an effective medicine," added Walton.

While working with the mushroom species Amanita, Walton and his teammates disassembled one of its poisonous peptides, which can be compared to a laser-guided missile with a nuclear warhead. By removing the molecular equivalent of the deadly warhead, they arrived at a sturdy, precise delivery system that could supply medicine - rather than poison - to a single target.

Promoted
Listen to the latest songs, only on JioSaavn.com
By taking a laser, rather than a shotgun approach, scientists could develop medicines capable of curing disease without the patient suffering any side effects. The enzyme that the team discovered is called POPB, and it converts toxins from their initial linear shape into cyclic peptides, fortress-like molecular circles comprising eight amino acids.

Harnessing the distinct properties of POPB will allow scientist to create billions of variant molecules, which can be tested against many different medical targets such as pathogenic bacteria and cancer.