Should You Really Give Up Chocolate and Coffee? 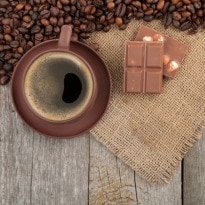 Be it carbohydrate-rich foods or chocolates, most people try and give up something at the beginning of the year as a new year resolution to be fit and healthy. But is striking out a food habit actually beneficial?

Here is a list of the most common food items, along with their benefits and drawbacks, that are shunned by most, reports dailystar.co.uk:

1. Chocolate:People tend to quit eating chocolates as experts say eating them means there is an increase in the consumption of sugar which is not too good for the body. (What makes chocolate so irresistible?)

Pros: American scientists have found that people who eat chocolate a few times a week are actually likely to be thinner than those who eat it very occasionally. Studies suggest chocolate may be good for the heart, brain and even your skin. (Hot chocolate can keep brain healthy)

Cons: The average chocolate bar contains 250 calories, lots of fat and sugar. Too much could lead to weight gain and excess sugar is linked to diabetes and tooth decay.


2. Coffee: The caffeine in coffee can make people feel dependent on it. (Caffeine compared: from coke to coffee)

Celeb quitters: Hollywood star Tom Hanks gave up coffee to lose weight while singer Katy Perry did it to improve her complexion. She swapped coffee for green tea.

Pros: Drinking coffee has been linked with lots of health benefits, mainly thanks to the antioxidants it contains. Studies have shown it could cut the risk of diabetes and even cancer, boosts memory and is known to be good for the heart.

Cons: A typical latte contains five gm of fat and around 225 calories. Excessive coffee intake can increase blood pressure and, instead of perking you up, it can actually make you feel more tired.

Cons: Experts have found that people who cut out carbohydrates completely perform worse in mental tests. There is also evidence that people on low-carbohydrate diets have higher rates of heart disease and strokes. (Eat right amount of good fat to stay healthy)