Too Much Stress May Lead to Memory Loss 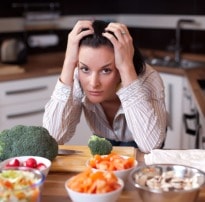 We lead busy lives and regularly find ourselves in stressful situations that challenge us mentally and physically. To cope with this stress our body releases cortisol, also known as the stress hormone that helps us decide whether to fight or take flight.

A short-term increase in cortisol levels is not harmful. But, it may shoot up to abnormally high levels when dealing with long-term stress which can cause digestion problems, anxiety, weight gain and high blood pressure.

A new research conducted at the University of Iowa has found a link between stress and short-term memory loss in older adults. The study, published in the Journal of Neuroscience, revealed that elevated levels of cortisol can result in memory lapses as we grow older.

"Research suggests that how the body responds to stress may be one of the factors influencing how the brain ages. Like a rock on the shoreline, after years and years it will eventually break down and disappear" said Jason J. Radley from the University of Iowa.

For the study, scientists linked the raised levels of cortisol to the gradual loss of synapses in the prefrontal cortex, the region of the brain that houses short-term memory. Synapses are the connections that help us process, store and recall information. And when we get older, repeated and long-term exposure to cortisol can cause them to shrink and disappear. The team measured levels of cortisol in the blood of young and old rats. To examine the performance of the cells in the prefrontal cortex of rats, the researchers placed the rats in a T-shaped maze that required them to use their short-term memory. In order to receive a treat, they needed to recall which direction they had turned in at the top of the T just 30, 60 or 120 seconds ago.

Promoted
Listen to the latest songs, only on JioSaavn.com
The researchers discovered that  older rats with low cortisol levels showed little memory loss and ran the maze almost as well as the younger rats, who were not affected by any level of cortisol -- low or high.

Jason also noted that stress hormones are not the only factor influencing memory decline during aging. "Nonetheless, the effect of stress hormones on the brain may be more widespread than previously thought," he added.