Flour, also known as all-purpose or refined flour, is made from wheat grains after removing the brown covering. It is then milled, refined and bleached. It is very common in Indian cuisine specially for various many Indian breads. It is commonly used in baking cakes, pies and other desserts. 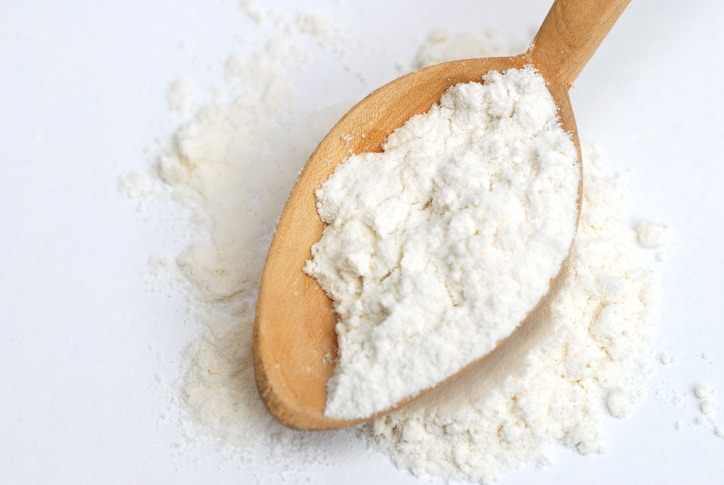 Flour, also known as all-purpose or refined flour, is made from wheat grains after removing the brown covering. It is then milled, refined and bleached. It is very common in Indian cuisine specially for various many Indian breads. It is commonly used in baking cakes, pies and other desserts. It may also be used as a thickening agent. It is white and powdery unlike whole wheat flour which is creamish and grainy.

There is always an ongoing debate as to whether flour is healthy or not. It may contain chemicals like benzoyle peroxide and alloxan which are added during the bleaching process. Since it is made from the white starchy part of the wheat grain there is a great loss of nutrients and hence whole wheat flour is preferred by many. While purchasing flour make sure that the color is white and without any yellowish tinge. Store in cool, dark, dry places and in containers where the flour can breathe. Moisture and damp environments breed insects.

Maida is most commonly used in breads, cookies, pastries and cakes. It is used for making noodles, the outer coverings of momos, pasta, spaghetti, pizza crusts. In India. it is used in making traditional Indian pan-based breads like naans. Our breakfast staple - white breads are made with maida. It may be used to thicken sauces or as a crusty coating for fried foods. It is also used in Indian mithais.

The remains left behind once the bran and germ are removed from the wheat, are known as white flour. The Bran contains 76% of vitamins and minerals in wheat. Hence, the nutritional value of the leftover product is negligible. Whole wheat flour, made of the brown outer layer known as bran, is considered to be healthier than maida since it contains a higher level of dietary fibre.

In some south Indian cities, where there are no wheat farms, tapioca is used to make maida.

Owing to its sticky texture when wet, maida is alternatively used as an adhesive for wall posters in India.

Other Types of Flours

There are many varieties of flour, all purpose flour being one, other varieties include -

1. Bread Flour, which is high in protein.

2.Whole-wheat flour, which has a brownish color and is derived from the complete kernel. It is high in nutrition.

3. Cake flour, which is often used in sponge cakes, has the least amount of Gluten amongst all the varieties of flour.

4. High-gluten flour, which as the name suggests is not only high in its gluten content but is high in protein as well.

5. Barley, Buckwheat, Chickpea and Soy flour are some of the other types which are also available.