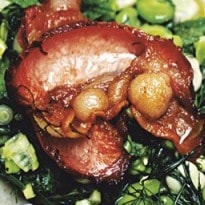 A chicken dish, lamb, pork and more from Tender Vol I, as part of Observer Food Monthly's celebration of Nigel Slater's first 20 years at the Observer

Cook the broad beans in a deep pan of lightly salted boiling water. They should be tender in 4 or 5 minutes. Cool them under running water, popping the bright green beans from their pale skins with your finger and thumb and dropping them into a bowl as you go. If the beans are really small and young, I sometimes leave the skins on.

Finely slice the spring onions and drop them into a mixing bowl. Chop enough dill to give you a couple of heaped tablespoons. Pull a loose handful of mint leaves from their stalks and add them to the spring onions with the dill and white wine vinegar. Crumble in a little salt and some coarse black pepper, then stir in enough olive oil to make a slushy dressing. I find 80-90ml is enough.

Lay the bacon in a non-stick frying pan with the merest drop of olive oil and let it fry till the fat is golden and verging on the crisp. Fold the skinned beans into the herb dressing and divide between two plates. Put a couple of rashers of bacon on each, tipping any hot fat in the pan over the beans.

As much as I like big flavours, I sometimes want something more gentle, a little genteel even. French beans lend themselves to such cooking.

enough for 2
chicken 2 plump breasts
oil a little
rosemary a bushy stalk
French beans 200g
chard 12 thin stems and their leaves
tomatoes 6 small ones, cut in halves or quarters, depending on their size
nasturtium flowers a few, if you wish

For the dressing, peel and chop the shallot very finely. Put it into a screw-top jar with a good pinch of salt, the lemon juice, olive oil and the leaves from the mint, lightly chopped (discard the stalks). Screw on the lid and shake the jar to mix the dressing.

Brush the chicken with oil, season with salt and black pepper and scatter with the finely chopped rosemary needles. Grill or roast until cooked right through and the skin is golden. Set aside for 10 minutes, perhaps with a mixing bowl over the top to keep it warm, saving any cooking juices that come from it.

Trim the beans, cut the chard stalks into similar lengths and remove and reserve their leaves. Boil the beans and the chard stalks in boiling water till tender - a matter of 2 or 3 minutes in each case (I prefer to do this in two pans, as the red from the chard water darkens the beans, but it is up to you). Dip the leaves into the water for 30 seconds. Remove and drain. Tip the dressing into the bowl, then add the drained green beans, chard leaves and stalks, the tomatoes and the nasturtium flowers if you are using them. Divide the salad between two plates or lovely white bowls. Cut the chicken breasts into thick slices - about four each - and place on top of the salad.

Young carrots, no thicker than a finger and often not much longer, appear in the shops in late spring, their bushy leaves intact. Often, they have a just-picked air about them, their tiny side roots, as fine as hair, still fresh and crisp. At this stage, they lack the fibre needed to grate well, and boiling does them few favours. They roast sweetly, especially when tucked under the roast. The savoury meat juices form a glossy coat that turns the carrot into a delectable little morsel.

I have used a leg of lamb here but in fact any cut would work - a shoulder or loin, for instance. The spice rub also works for chicken.

Put the lamb in a roasting tin. Peel the garlic and put it into a food processor with the cumin seeds, mint leaves and lemon juice. Add a generous grinding of salt and some black pepper. Blitz to a coarse paste, adding enough olive oil to make a spreadable slush, thick enough to cling to the lamb.

Massage the roast well with the spice paste, spreading it over the skin and into the cut sides of the flesh. Set aside in a cool place (preferably not the fridge) for an hour, basting occasionally with any of the paste that has run off.

Preheat the oven to 200C/gas mark 6. Scrub the carrots and beetroot - if they are small, you can probably get away with a rinse. Either way, be careful with their skins, which are tender at this point in their life. Put the meat in the oven and roast for 45 minutes to an hour, tucking the vegetables in around it after 20 minutes. The cooking time for the lamb will depend on how you like it done; 45 minutes should give you a roast that is still pink and juicy inside. Remove from the oven and rest the meat for a good 10 to 15 minutes before carving and serving with the mint béarnaise below.

If you want to make a gravy, transfer the meat and carrots to a warm place, put the roasting tin over a moderate heat, then pour in a large glass of wine or stock, or even water, and bring it to the boil. Stir with a wooden spoon, scraping away at the tin to dissolve any stuck-on meat juices. Let the gravy bubble a little, check it for seasoning (it may need salt and pepper), then keep it warm while you carve the lamb.

To make the mint sauce, peel and finely chop the shallot, then put it in a small saucepan with the vinegar, peppercorns and the stalks from the mint leaves. Bring to the boil and watch it while it reduces to a tablespoon or so. Put the egg yolks into a glass bowl and place it over a pan of very lightly boiling water. The bowl should fit snugly in the top of the pan. Whisk the reduced vinegar into the egg yolks, holding back the debris in the pan, then slowly add the butter a little at a time, whisking almost constantly till it is thick and velvety.

Roughly chop the mint leaves and stir them in, then taste for salt and pepper. Check that the sauce doesn't get too hot. It will keep warm till the lamb is cooked, with the occasional whisk, over the pan of water with the heat switched off.

Peppers with pork and rosemary

The deep sweetness of a roasted pepper makes it a suitable candidate for an exceptionally savoury filling. I have tried several over the years: beef with cinnamon and tomato; minced chicken, lemon and chillies; and more recently mozzarella and cherry tomatoes. Each had its merits, especially the latter with its tart juices. The latest manifestation of the stuffed pepper in my kitchen is one of highly seasoned minced pork with rosemary, parmesan and garlic. I think of it as the best yet.

Set the oven at 200C/gas mark 6. Peel and finely chop the onion, then put it into a large, shallow pan with the oil over a moderate heat. Let the onion soften without colouring. Peel and slice the garlic, chop the leaves from the sprigs of rosemary and add to the onion. When all is soft and fragrant, chop the tomatoes and stir them in. Continue cooking until the tomatoes have collapsed into the sauce. Season with salt and black pepper, then stir in the minced pork and the breadcrumbs. Remove from the heat.

Cut the peppers in half lengthways, remove the seeds, then lower them into a pan of boiling water and cook for 6 to 8 minutes, until they are slightly limp. Remove them with a draining spoon and put them skin-side down in a baking dish.

Divide the pork mixture between the peppers, then moisten with a little olive oil. Scatter grated parmesan over the top and bake for 35 minutes, till sizzling.

A warm pumpkin scone for a winter's afternoon

A warm scone is an object of extraordinary comfort, but even more so when it has potato in it. The farl, a slim scone of flour, butter and mashed potato, is rarely seen nowadays and somehow all the more of a treat when it is. I have taken the idea and run with it, mashing steamed pumpkin into the hand-worked crumbs of flour and butter to make a bread that glows orange when you break it. Soft, warm and floury, this is more than welcome for a Sunday breakfast in winter or a tea round the kitchen table.

Cooked initially in a frying pan and then finished in the oven, I love this with grilled Orkney bacon and slices of cheddar sharp enough to make my lips smart - a fine contrast for the sweet, floury "scone" and its squishy centre.

Cut the pumpkin into large chunks and steam until tender enough to mash.

Mix the flour, bicarbonate of soda and salt in a large bowl. Cut the butter into small chunks and rub it in with your fingertips. You could do this in a food processor, but it hardly seems worth the washing up.

Crush the pumpkin with a potato masher, then beat in the egg, followed by the milk and thyme leaves. Scoop this into the flour mixture and mix well. Season with black pepper.

Warm a heavy, non-stick frying pan with a metal handle over a low to moderate heat. Melt a little oil or butter in it, then pile in the dough and smooth it flat. Leave to cook over a low heat till the underside is pale gold.

Lightly oil a dinner plate. Loosen the underside of the scone with the help of a palette knife. Put the plate over the top of the pan, then, holding the plate in place, tip the pan so that the scone falls on to the plate. Slide the scone back into the frying pan and cook the other side for 4 or 5 minutes. Put the pan in the oven for 7 minutes or until the scone is lightly set in the middle.

Turn the scone out of the pan and slice into thick wedges. Serve warm, with cheese or some grilled bacon.