The 'Andhadhun' actor had a close-knit birthday celebration yesterday at home with wife Tahira Kashyap. 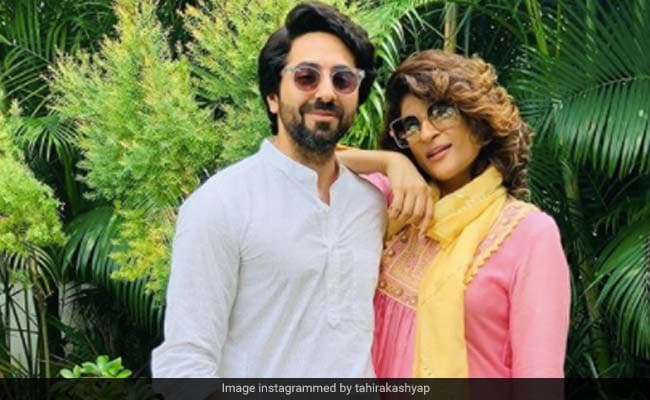 Tahira Kashyap took to Instagram to wish her husband with an adorable picture.

Ayushmann Khurrana celebrated his 36th birthday on Monday, 14th September 2020, and the actor was showered with many wishes from friends and industry colleagues. The 'Badhaai Ho' actor is known for his offbeat roles and acting prowess, right from his debut 'Vicky Donor' to his last stint 'Gulaabo Sitaabo'. The versatile actor has garnered critical acclaim as well as fan-following from across the world. Ayushmann celebrated his special day with wife Tahira Kashyap, who posted an adorable picture with him from the party on Instagram.

Later in the day, Tahira also posted the picture of the beautiful cake that was half-devoured by the Khurranas. The cake was a dense, rich chocolate one, glazed in white chocolate ganache from outside along with golden sprinkles and fun blue and red spots over it. With a beautiful golden knot on the top, the cake sure looks like a delightful treat. And guess what? It was made by a 13-year old girl! Yes, you read that right. Tahira wrote in her caption, "Devoured half of this amazing cake made by 13-year-old Saanvi! @payalg you have a little prodigy at home! (sic)"

Doesn't it look gorgeous? We are sure Ayushmann had a lovely celebration at home with this beautiful cake. After his last blockbuster 'Gulaabo Sitaabo', which was released on OTT platform, garnered rave reviews. Fans are waiting for him to announce his next project. Here's wishing the actor a very happy birthday and hope to see him back on screen soon!