Boy Had Five Seconds To Take What He Wants From Store. Netizens Love What He Chose

A teenage boy was faced with a dilemma of choosing any number of things in just five seconds. What he chose will simply melt your heart away! 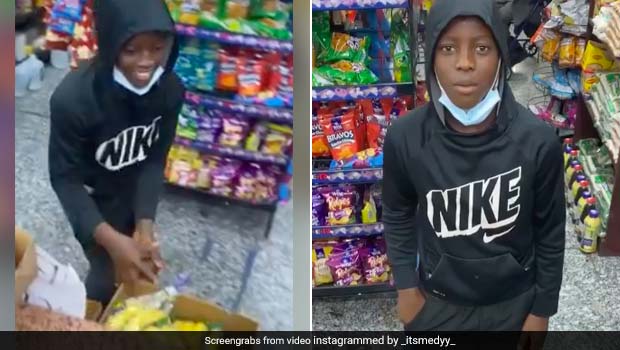 This heartwarming video showed a boy and his surprising antics at the grocery store.

Shopping is an enjoyable experience, especially shopping for food. With an array of brightly lit products on display and rows of delicious goodies - we are truly spoilt for choice. We often like to take our own sweet time closely examining and selecting what we really want to buy. But what if you had just five seconds to grab what you like from a store? A teenage boy faced a similar dilemma when he came to a grocery store. Check out the video which is now going viral:

The cashier or person behind the store's counter was recording the video. He asked the boy to answer a simple maths question to get five seconds of free shopping in the store. On getting the answer right, the cashier started to count down from five to one very slowly. The boy first chose to take fresh produce such as bananas, avocado, onions - a gesture which took netizens by surprise. He later proceeded to grab packaged food and a box of Apple's AirPods.

The video was originally shared by user @_itsmedyy_ on Instagram, and it soon went viral garnering millions of views. Several users poured in their responses, such as one who wrote, "The fact that he wasn't trying to just empty your shelves (which I wouldn't judge) but instead he got what his family needs to make a delicious meal says a lot about that young man! Thank you for being a blessing to people who need it!" Another one commented, "That's how you know he's been raised well."

What did you think of the sweet video? Tell us in the comments below!