Disneyland's 'Baby Yoda' Cocktail Is All About Blueberries, Lime And Cuteness

Post its launch in mid-December last year, the Baby Yoda cocktail is on high demand at eateries in Anaheim and Orlando's Disneyworld. 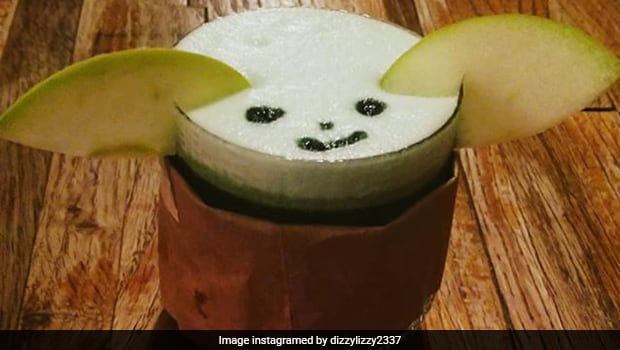 All the enthusiastic visitors of Disneyland have one more thing to look up to, and that's the 'Baby Yoda' cocktail. 'The Child' or as fans and media address 'Baby Yoda', is a fictional character from the Star Wars Disney+ original television series 'The Mandalorian'. He is a member of the same alien species as Jedi Master Yoda, a popular character from the original trilogy and prequel trilogy of Star Wars films. Post its launch in mid-December last year, the cocktail is on high demand at eateries in Anaheim and Orlando's Disneyworld.

As per a report in ANI, the drink was spotted at Trader Sam's Grog Grotto in Disney's Polynesian Village in Walt Disney World and Trader Sam's Enchanted Tiki Bar at the Disneyland Hotel in Disneyland. This cute and appealing drink, as per Karen and Alexis who visited Trader Sam's Enchanted Tiki Bar, "has pineapple and coconut-y flavours so it's pretty tropical, but not at all too sweet! Unfortunately, we do not know what exactly is in it. The eyes are blueberries that have a sweet coating on them." They also mentioned that the drink is not on the menu and one has to ask the bartender for 'The Child' or 'The Baby Yoda' drink.

Baby Yoda or The Child

Although the secret ingredient of this magical drink is not known, pictures uploaded by the visitors at the eateries in Disneyland indicate that the drink comes with blueberry eyeballs and lime wedge ears, wrapped in a cocktail napkin, symbolizing the robe worn by 'Baby Yoda'. As per the ANI report, a Disneyland representative in a statement said, "This is a great example of just how creative and passionate our cast members [employees] are."

However, Disneyworld is not the only place which attempted this 'Baby Yoda'-inspired cocktail. As per some of the pictures uploaded on Instagram, this drink is also served at The Sheridon Room in Minnepolis and Phoenix's Lux Central. So, if you are planning for Disneyland this year, then you surely know what to add to your bucket list.

Karan Johar Bakes Yummy Treat For Kids Yash And Roohi, And Customises It Too!
Kolkata's Innovative Corona 'Sandesh' Goes Viral On Social Media. Would You Try It?