Vegan Menu To Paper Straws: This Is All Golden Globes Served

Being one of the early recognizes of trends and innovation, Golden Globes 2020 on Sunday served plant-based food 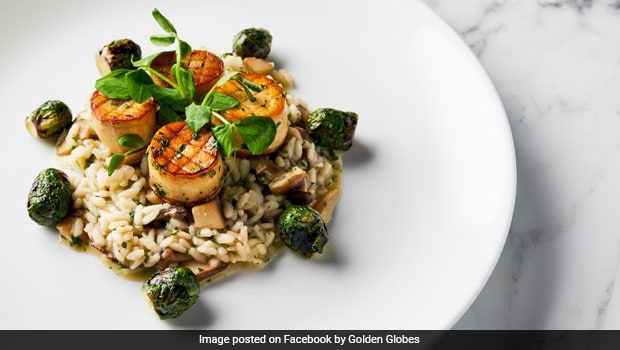 The 77th Golden Globe Awards 2020 was all about environment and sustainability. Being one of the early recognizes of trends and innovation, this annual event on Sunday served plant-based food, including a chilled golden beet soup and king oyster mushrooms with risotto. Although there have been vegan and gluten-free menu items in the past, this marked the first of its kind major award event that had vegan as their sole option. This initiative, as per the organizers Hollywood Foreign Press Association, was a way to focus awareness on the need to countenance sustainable lifestyles as "our world moves towards climate and environmental insecurity" sans sacrificing the quality of life. HFPA also took a stand against plastic pollution by altering plastic straws with paper drinking straws and working with Icelandic Glacial to serve water in glass bottles.

Speaking about their initiative, HFPA president Lorenzo Soria, in a Facebook post said, "Over the holidays, we took time to reflect on the last year and began thinking about the New Year and the decade ahead. The climate crisis is impossible to ignore and after speaking with our peers, and friends in the community, we felt challenged to do better. The decision to serve an entirely plant-based meal was embraced by our partners at the Beverly Hilton, and represents a small step in response to a big problem. By partnering with Icelandic Glacial to hydrate guests via glass bottles, eliminating single-use plastic, and serving a 100% plant-based meal, we're hoping to raise awareness around small changes that can have a greater impact. We know Awards shows have a long way to go, and we all can do better."

Leonardo DiCaprio, who is known to a strong environmental campaigner, applauded the move by tweeting his thanks to the Association. Further, Joaquin Phoenix who scooped the gong for 'Best Performance by an Actor in a Motion Picture (Drama)' for his phenomenal performance as Arthur Fleck in 'Joker', took to stage to praise HFPA's decision of serving a vegan meal. "I'd like to thank the Hollywood Foreign Press for recognizing and acknowledging the link between animal agriculture and climate change. It was a very bold move, making tonight plant-based, and it really sends a powerful message," he said in his acceptance speech.

Joaquin Phoenix at the Golden Globes

Here's How The Menu, Curated By Beverly Hilton Chefs Looked Like:

Varun Dhawan And Natasha Dalal’s Wedding Menu Was A Global Feast (Deets Inside)
'We Have Cake For Every Occasion': Yami Gautam Wraps Shoot For 'Bhoot Police'