Desis on Twitter couldn't help but guffaw at Nigella Lawson's choice of words to refer to something as quintessential to our own cuisine as green chutney. 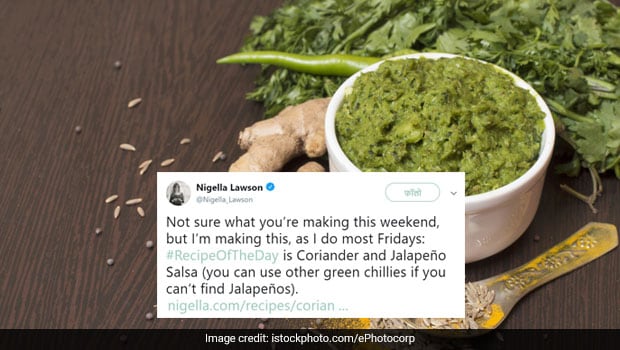 It's a truth universally acknowledged that nothing escapes the watchful eyes of the people of Twitter (also known as 'Twitterati' and 'tweeple'). The microblogging website is a hotbed for breaking news and more importantly jokes, memes and a lot of comic commentary on the latest trending issues. Food, being close to the hearts of humans, often becomes a topic of contention for people on social media. This is what happened when world-renowned food writer and food show host Nigella Lawson posted about a permanent Friday fixture at her home- coriander and jalapeno salsa. Needless to say, desi Twitterati were quick to point out that the 'salsa' that Lawson was talking about was nothing but our very own green chutney or dhaniya chutney.

Anybody who has grown up desi will know the joy of eating green chutney with anything and everything including parathas, samosas, pakoras, chaat and even mixing it with curd to make a spicy raita. Green chutney is one of the foremost Indian dips among a whole gamut of condiments that are popularly consumed around the country and it has apparently found a fan in the culinary maestro Nigella Lawson as well. The 59-year-old recently posted a recipe of the chutney on her Twitter account saying, "Not sure what you're making this weekend, but I'm making this, as I do most Fridays: #RecipeOfTheDay is Coriander and Jalapeno Salsa (you can use other green chillies if you can't find Jalapenos)." (sic)

Also Read: Chef Gordon Ramsay Posts Pic Of Butter Chicken From His Restaurant: Twitter Attempts To Roast Him In His Own Style!

Not sure what you're making this weekend, but I'm making this, as I do most Fridays: #RecipeOfTheDay is Coriander and Jalapeño Salsa (you can use other green chillies if you can't find Jalapeños). https://t.co/3EPG8By3Wnpic.twitter.com/EsG95TOdqT

Indians and other desis on Twitter couldn't help but guffaw at Nigella's choice of words to refer to something so quintessential to their own cuisine. "U mean green chutney????", wrote one user. "In India we call it simple plain green chutney, a staple of most kitchens and made fresh every day with a wee bit variation in flavours in various households", wrote another.

Check out some replies to Nigella's recipe of coriander salsa:

Noooo... “Guys you know I had this awesome jalapeños and coriander paste with deep fried spicy tuber wrap.”

Promoted
Listen to the latest songs, only on JioSaavn.com
— Ishan Bhatkoti (@Ishan_bhatkoti) September 20, 2019

Well, what's in a name? A chutney by any other name would taste just as delicious, wouldn't it?