Varun Dhawan tied the knot with designer Natasha Dalal in a close-knit ceremony in Alibaug on Sunday, 24th January, 2021. 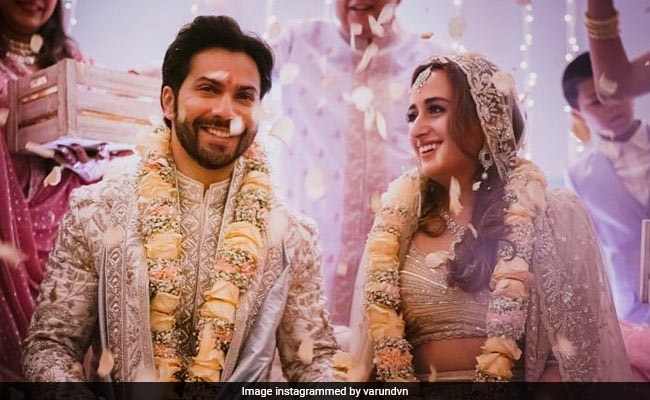 Pictures from Varun and Natasha's wedding went viral in no time.

After a long buzz and rumours, Varun Dhawan finally tied the knot with his longtime girlfriend, designer Natasha Dalal in a close-knit ceremony in Alibaug on 24th January 2021. Varun took to his social media handles to announce it shortly after the ceremony and wishes started to pour in right after. With just his family and close friends around and many restrictions in place, it was only after he officially made an appearance in front of the media with his wife we got some stunning pictures of the couple. But what kept the fans and the media outside the venue happy and satisfied (besides the hope of catching a glimpse), were some 'shaadi ke ladoos' sent by the family.

As per many pictures and videos that went viral, Varun's security head Yusuf Ibrahim was seen getting a huge box of what looked like decadent motichoor ladoos moments after Varun and Natasha's wedding ceremony! Popular Bollywood photographer Viral Bhayani shared a video on Instagram, which Yusuf shared too. Have a look-

After Varun officially announced his wedding on social media, their wedding planners Shaadi Squad, who also planned Virat-Anushla's wedding in Tuscany, shared inside details about the designers, venue, photographers and caterers! The food was managed by the in-house catering of the wedding venue - The Mansion House - along with The Intercontinental (Marine Drive).

Among the guests were his mentor and director Karan Johar, Shashank Khaitan, Kunal Kohli and designer Manish Malhotra. Several pictures of the couple are going viral on the internet.