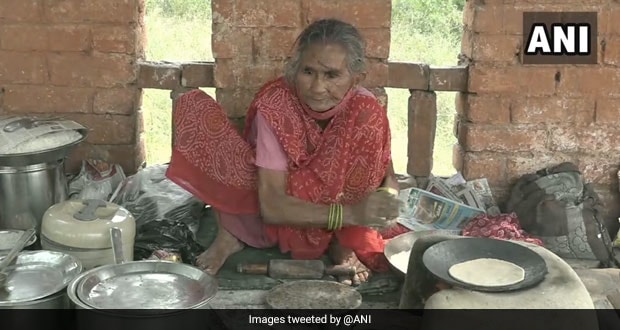 Baba Ka Dhaba's success story reinforced the power of social media. Merely days after the story of the 80-year-old couple's failing dhaba business went viral, the whole nation came out in support and scores of people started flocking the dhaba out of love and sympathy. A similar story of an 80 year old woman, now famous as 'Rotiwali Amma', running a roadside food stall, caught the attention of netizens, but failed to recreate the same magic so far.

Bhagwan Devi, a widow, has been running the food stall for the past 15 years selling a thali of roti, dal, vegetables, and rice for just Rs 20. Like many other small and big businesses, 'Rotiwali Amma' too saw a sharp decline in her business as footfall became scarce in the wake of the Coronavirus pandemic.

(Also Read: Kolkata Restaurant Is Offering Mask With Zip! Customers Can Eat While Wearing Them)

She says, “I have been doing this for over 15 years. But, there's hardly any sale these days.” pic.twitter.com/WIJEWW5Hoo

'Rotiwali Amma' runs her tiny food stall near St John's College in Agra. Being a roadside stall, she also faces a threat of being removed from the road. Sharing her ordeal, Amma also revealed that her two sons don't look after her and that's why she runs this eatery to earn a livelihood. "Nobody is helping me. Had somebody been there with me, I won't have faced this situation. Most of the time, I am asked to leave this place. Where will I go? My only hope is if I get a permanent shop," she said, as per a report in ANI.

Like Delhi's Baba Ka Dhaba, Agra's Rotiwali Amma's video also went viral on social media, but she is still waiting for customers to turn her luck around. Here are some posts that surfaced on the internet seeking support for Rotiwali Amma.

Can we get her a stall? Need some trustworthy person to work with. We have millions of desi scammers who tend to ruin this..

Would like to donate money to her so that she can set up stall. Anyone from agra to get her bank account details ?

A helping hand can bring massive change in lives of needy. Underprivileged section of society has been worst hit by COVID pandemic. A similar case came to light in Agra. ‘Roti Wali Amma' who sells a ‘thali' for rupees 20 is finding difficulties in filling her own stomach. pic.twitter.com/IAqvPIywj9