Dal In Biryani!? This Viral Biryani Recipe Video Made With Chicken And Dal Together Outraged Twitter

Viral Video: A food website shared a recipe video of dal biryani, which created a strange amalgamation of chicken, potatoes and dal! 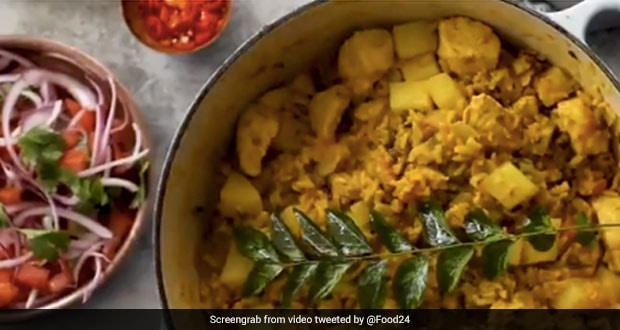 Strange biryani recipes often stir up debates on the internet.

Biryani is one Indian dish that is popular all across the globe. If the rich flavours of the rice dish didn't catch everyone's attention, the endless discussions and sparring arguments on the internet over its authenticity hogged the limelight. In India, biryani often falls prey to the never-ending tussle between non-veg biryani and veg biryani. If that wasn't enough, some bizarre versions of biryani outraged the internet, and this 'dal biryani' is the latest one that dared to step in the ring.

A South African food website shared a recipe video of dal biryani, which created a strange amalgamation of chicken, potatoes and dal! Traditional biryani recipe hinges on the flavour of one food ingredient only, which is enhanced by slow-cooking it with hot spices. Not surprisingly, the video went viral for all the wrong reasons and was shot down by foodies, especially Biryani lovers, on Twitter.

In celebration of Heritage month we've whipped up an easy-to-make, scrumptious biryani that'll have you coming back for seconds >> https://t.co/5oIFxD8P7Hpic.twitter.com/bFA95EhXYE

Many Twitter users poured out their anger over the twisted biryani recipe. Here are some Twitter reactions -

I think they're just wrong at naming ut biryani because its not Biryani. No one adds lentils and these much veggies in biryani. Its a different recipe for something else but not biryani at all.

Hi @IntlCrimCourt I'd like to report a war crime... https://t.co/vQwStu9FkY

It didn't take much for the posters of the viral video to realise that the recipe is offending people instead of impressing them. They issued an apology and admitted 'they got it wrong'. They even invited the users to help them find the correct biryani recipes - "We would like to make a #BiryaniTogether - to all recipe developers and chefs who would like to work with us on a traditional recipe, please make contact with us and let's do it together."

Instead of taking down the video, they kept it for the sake of discussion. "This post will remain on Twitter in the interests of discussion and transparency. The original video has been removed from all our other platforms."