Cheese Kept Disappearing From Fridge, Thief Turned Out To Be Adorable Dog

Dog Viral Video: A family wanted to find out who is stealing cheese from their fridge. They set up a camera and it turned out to be their own pet dog! 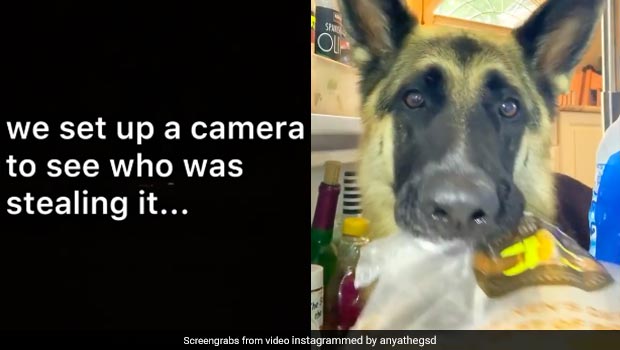 There are few things in the world as wonderful as cheese. Grate it over your favourite pasta or sprinkle it over fresh sandwiches, cheese is an ingredient which makes everything seem better. Cheddar, Mozzarella, Brie, Gouda, Feta - there's a kind of cheese to satiate all kinds of palates. The last block of cheese lying in the fridge becomes a prized possession of its own, which is why a family set up a camera inside the fridge to figure out why the cheese in their fridge kept disappearing. The investigation yielded an unexpectedly hilarious result. Take a look:

"Cheese kept disappearing from our refrigerator, so we set up a camera to see who was stealing it," said the opening text in the video. The next thing you see is the fridge's door slowly opening to reveal the person who was committing the cheesy crime. The culprit of the cheese thievery turned out to be none other than the family dog, Anya! Much to everyone's surprise, it was the dog who was stealing the cheese single-handedly without any human help. The cute German Shepherd was caught on camera opening the fridge's door and grabbing a plastic bag full of cheese before swiftly disappearing.

The adorable video went viral and received 42k likes and counting on Instagram. The caption, "Who else loves cheese," struck a chord with many cheese lovers across the internet. Users poured in their comments about how the dog was incredibly smart to pull off the theft by itself. Others said that they would probably do the same too thanks to their love for cheese. The video was shared on Instagram @anyathegsd, which is a handle dedicated to other such adorable antics of Anya, the German Shepherd dog.

What did you think of the cheese-loving dog? Tell us in the comments below!