Watch: How To Open Pineapple Using Bare Hands? Viral Hack Has Got You Covered

Pineapple peeling hack: A recently surfaced video shows how exactly you can open up a pineapple using just bare hands without the need for any equipment. 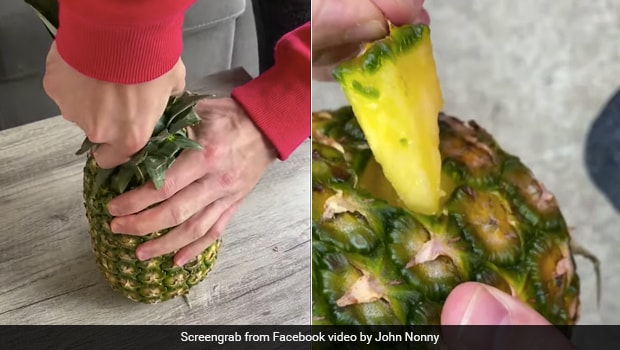 Pineapple hack: This is the easiest way to open a pineapple without any equipment.

The brightly coloured pineapple is known to be a healthy addition to our diet. A 100-gram serving of the juicy tropical fruit contains an abundant amount of Vitamin C, as per the USDA. However, the actual consumption of the delicious fruit is another hassle altogether. Whole pineapples are really hard to cut and peel and require a lot of effort. Canned pineapples usually end up containing dubious amounts of sugar. A recently surfaced video shows how exactly you can open up a pineapple using just bare hands without the need for any equipment. Yes, it's possible!

Opening up a pineapple from r/Unexpected

The video was shared on the subreddit r/Unexpected, which has 3.3 million members. The 3-minute long clip has received 84.8k upvotes within 48 hours of being posted by user u/sparkling_mailbox. The pineapple hack was originally sourced from artist John Nonny on Facebook, where it received over 15 million views in the span of a single week.

In the viral clip, we can see Nonny in frame taking directions from a friend. The friend is the one holding the camera and he reveals to John how they will open up a pineapple using just bare hands. The person holding the camera instructs him to take a pineapple and screw off the stem from it just like a bottle cap.

Then, the duo shakes up the pineapple by repeatedly thumping it on the ground from the bottom. After this, they roll it around vertically and shake it up some more. The pineapple is now 'loosened up' as they called it in the video. And that was it! They used the tiny rings on the pineapple to pull apart each individual fragment which was already built on the fruit. The unbelievable part was that it actually worked like magic. The genius hack got the pineapple in a ready-to-eat state with zero equipment, no hassle, and simply by using bare hands. Amazing, right? Take a look at the full video here:

In March 2019, a similar video had done the rounds on the internet. The video showed a user chomping off on a pineapple by using hands only, but how they got to the stage was unclear. Several renown food bloggers and channels had attempted to decode how exactly pineapple could be eaten this way. Some users also expressed their concern about the exact variety of pineapple that the hack could work with. Click here to watch it.

So, what are you waiting for? Try this incredible hack on your next batch of pineapples, and tell us how the results came out!