Watch: Video Of Dog Eating Ice Cream Is The Cutest Thing On The Internet Today

Viral Video: Boomer found solace from the summer heat in his favourite treat. A video of him gobbling up an ice cream cone is winning the internet. 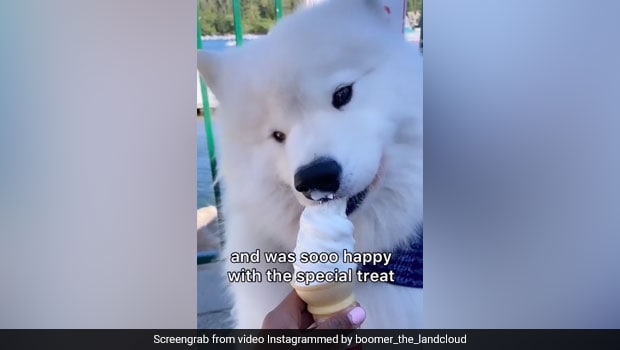 Viral Video of a dog eating ice cream has got netizens surprised.

The soaring temperatures often make it difficult for us to function. Not just humans, in fact, even animals feel the scorching heat equally as much. The best way to cool off on hot days is to eat something chilled and refreshing, whether it's a summer fruit or a chilled drink. Boomer, an adorable dog from California, found solace from the summer heat in his favourite treat - an ice cream! A video of him gobbling up an ice cream cone is winning the internet. Watch the video here:

The video describes how Boomer was feeling sad because it was a hot day, and so his pet parents decided to take him out on an 'adventure'. They got him an ice cream cone which he slurped on and finished in no time. The video shows how Boomer loved every bit of the chilled treat, after which they headed to a lake. It was a summer afternoon done right!

Boomer is of the Samoyed breed who is a medium-sized herd dog originally from Russia. The fluffy dog from Los Angeles, California, has been taking the internet by storm due to his adorable antics. His Instagram page alone has 116k followers and his videos receive several thousand likes and comments. Boomer has a special corner for not just ice cream, but watermelon too! Take a look at some more videos from his handle.

We hope we get to see more of Boomer trying out more such delicious treats! What do you think of the videos? Tell us in the comments below!