11 Ways to Eat More Healthily - Without Ruining Your Life 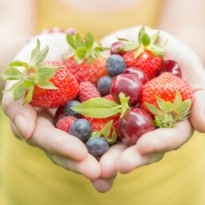 Believe it or not, you can improve your diet and still enjoy meals. Here's how ...

"The only way to keep your health is to eat what you don't want, drink what you don't like, and do what you'd rather not," Mark Twain once wrote, predating the concerns of a generation of 5:2 dieters by a good century. It's a common fear: that any attempt to eat better means somehow downgrading your quality of life, spending hours cramming steamed chicken into endless Tupperware containers and maybe - just maybe - never being able to have a Belgian bun again. But that's not really true. You can improve your diet without sacrificing everything you hold dear.

This doesn't have to be difficult. The main thing to do is add protein - which experts roundly agree increases satiety and makes mid-morning snacking less likely - and fruit or veg. Two scrambled eggs and a handful of spinach (wilted if you've got the inclination, stirred with a fork on which you have speared a freshly peeled clove of garlic if you need flavour) will cover this quite nicely. No time/budget for that? Greek yoghurt and a chopped banana in your porridge (cooked with milk, obviously) is a fine option. No time for that? Even an apple with a spoonful of nut butter is better than cereal - especially since non-digestible compounds in granny smiths have been linked to obesity-fighting effects.

If you make only one change to your diet, cutting out calories from fizzy drinks is the easiest. Not only do they contain up to 35g of sugar per can (which some experts have suggested should be your daily limit), there's evidence that even the diet variety can keep you addicted to the taste of sugar. Swap them for sparkling water with lemon or lime (or both, for a Sprite-like treat): there's some evidence that they blunt the insulin spike that usually happens after a big meal, meaning you're less predisposed to store food as fat. As for hot drinks, cinnamon has a similar effect - add it to your latte - and green tea even has a mild thermogenic effect, meaning that it helps to burn fat. Nobody's telling you to forgo builder's tea entirely, but the occasional swap won't hurt.

Any plan that relies on having a stack of broccoli-loaded Tupperware (or a healthy eatery) on hand at all times is doomed to failure. Instead, use if-then planning and work out your worst-case dietary backup plans right now. Good examples would be: "If I miss breakfast, then I'll grab a bag of beef jerky and an apple, not a croissant," or: "If I'm stuck at a service station, then I will have some cashew nuts, not a horror-pasty." There's mounting evidence that having pre-programmed behaviours can keep you on track when you're at your weakest.

Nutritionists are divided on the value of "cheat days", where all dietary bets are off. One camp says that they're essential to keep your metabolism firing correctly and provide a valuable psychological crutch because you know that, for example, you're allowed to eat cherry bakewell tarts once a week. The other argues that the word "cheat" has negative connotations, and you have to be eating like a monk before the metabolism thing is necessary. A couple of points that nearly everyone agrees on: you should probably stick to one "cheat meal" (basically, everything's legal until you get up from the table), and you shouldn't keep the surviving Pop-Tarts in the house once it's over.

They're potassium-rich and stuffed with vitamin A, they're less than £2 a bag, and yet Marks & Spencer recently concluded that most people have no idea how to cook them. This is ridiculous, because they're basically potatoes. The safest three options are: 1) stab them with a fork and microwave them; 2) chop them into wedges, brush them with oil, sprinkle with paprika and bake for 20-25 minutes; and 3) peel, boil and mash them, preferably with butter. Which leads us to ...

You should probably get a butter dish. The rehabilitation of butter gathered steam in 2014, with Dr Aseem Malhotra arguing in the British Medical Journal that it contains valuable levels of vitamin D and blood pressure-lowering phosphorus and calcium. Meanwhile, a slew of studies suggest that saturated fat isn't the dietary monster it was painted as in the 1980s. And, to be brutally honest, butter doesn't have the raft of additives, stabilisers and transfats found in the spreadable competition. Speaking of which, avoid spreadable "butters": they're typically made with added oil, and it usually isn't good for you

Yes, you should eat broccoli: it has many beneficial effects, and there's some evidence that steaming actually enhances them. This doesn't mean it has to taste awful: first, parfry it in butter (yes, that again) then chuck in a splash of water, add a lid and steam it the rest of the way. You should also be eating spinach (wilt it in coconut oil, preferably stirring it with a garlic clove-tipped fork for flavour) and kale crisps.

8. Get a slow cooker

Caramelising onions and making cornflour paste after eight or nine hours at work is nobody's idea of a good time. To head off the temptation of a post-work Sloppy Giuseppe, a slow cooker is your best bet - you can sling some chicken thighs, minced garlic and soy sauce in in the morning, and come back to a feast. Decent ones start at about £20.

High-carb? Low-carb? Zero-carb? All varying degrees of madness. The real trick to carbs, according to a host of nutritionists, is eating them - or steering clear of them - based around how much physical activity you're doing. If your day's exercise is fiddling with a computer keyboard, for instance, you might do well on the "paleo diet", which suggests that you steer clear of rice, potatoes and bread. If you're Sir Steve Redgrave, you can probably get away with the occasional bag of chips.

Yes, there's evidence that the resveratrol in red wine promotes health and longevity, but that doesn't mean you should drink it every night. Liver disease is one of the fastest-growing killers in the UK, and self-administering a quick glass of red after a long day means that it's difficult to keep track of your intake. "It's very easy for people to pour a glass and have no idea how much they are drinking," Duncan Selbie, the head of Public Health England, recently wrote in a memo to staff, and he's right: a single 250ml glass a day adds up to 21 units a week, the recommended limit for men (and well over the 14 suggested for women). The odd day off isn't enough: your body needs 48 straight hours to start undoing the damage, which is why the British Liver Trust recommends two teetotal days a week. Come on: anyone can get through Monday and Tuesday without a drink.

Fundamentally, that's anything that grew in the ground or used to have a face. Michael Pollan has made a career of saying this, but even elite-level athletes are starting to jump on the bandwagon: chefs like Alan Lim are introducing "real" food back into the pro-cycling peloton after noting that rice cakes and mini-frittatas are easier on the digestion than gels and shakes. Find nice ways to cook things that only have a single ingredient on the packet, and the battle's half won.

Joel Snape runs the website livehard.co.uk and is the editor of Eat Fit magazine