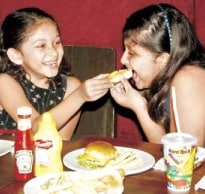 There aren't many restaurants in the city that cater to the younger lot (and their tinier tummies). And those who do make sure they stock only the staple pizzas, pastas and burgers

This pasta is so good!" says Khadjia Bandukwala, using French fries to lick the dregs of white sauce off the plate. The nine year-old foodie knows exactly what she likes and why.

"The pasta was even better than the one at Spaghetti Kitchen. It wasn't too cheesy. It was perfect. I can easily finish off this portion alone," she adds, while her little sister Samina nods in agreement. Six year-old Samina enjoys the Jimi Tenderstick (Rs 210) -- strips of batter fried chicken served with a honey mustard sauce.

We're having lunch with the two girls, who are having a field day sampling the 'Lil Rocker menu at Hard Rock Café. The items on this special menu, which comes as a place mat only at lunchtime, include a chicken burger (Rs 210), cheesy macaroni (Rs 250) and a hot dog (Rs 190). The food is served in smaller portions and is less spicy to suit the children's palates.

Sticking to the staples

Hard Rock Café isn't the only restaurant in the city which caters to smaller tummies. Belgian restaurant, Le Pain Quotidien, offers pasta with pesto or tomato sauce (Rs 350), macaroni and cheese (Rs 375), and roast chicken (Rs 250 as part of their children's menu. Manchester United Cafe Bar offers special kiddie combos (Rs 350-395) -- footie fans who come in to watch the match can choose between a pasta and a burger. Pic/ Neha ParekhCafé Pico at Phoenix Marketcity Kurla, which opened in June this year, also ensures they have a separate section for their little patrons to choose from. Although their adult menu covers food from across the globe -- including Argentian, Brazilian and African food -- the menu for children is incredibly predictable. It includes macaroni and cheese (Rs 175), chicken goujons (Rs 200), fish and chips (Rs 210) and cococcino (a non-caffeinated drink; Rs 80).

"My biggest critic is my three year-old son Kyle," says Nicole Gonsalves Pereira, head chef at Café Pico. "It was only when I had him that I realised that children really don't care about gourmet food," she laughs. Now she knows it is important to keep their little taste buds in mind.

"There may be just three food items on our menu, but they're exactly what children would go for. If not, they can always order from the main section and share with their parents," says Pereira, admitting that children aren't likely to experiment too much. Pic/ Neha Parekh

One of the advantages of a children's menu is the smaller portions. Children can order their own food and be served in their own plate without wasting anything. "Children don't eat as much as adults do. We offer smaller portions and price the dishes accordingly," says Crystal Mendonca, chef at Peninsula Restaurant, where children are offered 'fun foods' such as checkerboard sandwiches (made using a combination of white and brown bread; Rs 130) and bunny-shaped chicken nuggets (Rs 200).

According to food writer and mother Rushina Munshaw, city restaurants don't pay attention to children's menus. "They make assumptions and serve popular junk food," she adds. Munshaw and her family prefer to take the healthier route and eat at home as often as possible.

Pereira knows that no child will appreciate being served boiled vegetables. "Serve them something deep fried and they're happy," she says. She still strives to feed her little patrons a healthier meal. "We don't use any pre-packaged foods. Everything we serve has been made from scratch. We even make our own tomato ketchup," she says. Pic/ Neha Parekh

Mendonca ensures total hygiene while serving children. "We take extra care to prevent cross-contamination. For instance, if we've used the knife to chop nuts, we don't use it to chop something else. You never know what allergies the child may have; it is just safer to anticipate trouble," he says.

Keen on being considered a family restaurant, California Pizza Kitchen (CPK), makes a conscious effort to target their pint-sized patrons. "If the children aren't happy, the parents will certainly not be happy," says Bakul Kodikal, regional kitchen manager, CPK. Their menu is designed as an activity book complete with colouring pages, connect the dots, decode the hidden message and a maze.

Ten year-old Raghav Agarwal is definitely a happy CPK customer -- it's his favourite restaurant in the city. "I just went there yesterday for a birthday party," say Agarwal. "I love the barbeque pizza and the cheese pizza. My sister and I always share either the pizza or the pasta there," he adds. "Finding a restaurant where we can all go have a good meal is really difficult," adds his mother, Rajni. "Once we went to Bungalow 9 and we found that there was nothing on the menu for the kids," adds Rajni, who also has a five year-old daughter, Aryahi. "My kids are definitely a fussy lot. Either they'll eat junk or roti-subzi."

Ask Agarwal about the strangest thing he's put in his mouth and he quickly describes it for us. "It was some Japanese dish -- something black which was wrapped around some kind of coral or something. I didn't like it at all," he says.  We think he means sushi. Oh well, that's definitely not making it to any children's menu anytime soon.