British Food Winning Over the French 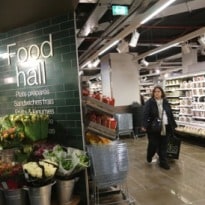 "You can't trust people whose cuisine is so bad." It was 2005 when France's president Jacques Chirac made his infamous put-down of his British neighbours.

But almost 10 years on, British food is flying off French shelves - so much so that posh crisps from companies such as Tyrrells are known as "English crisps" and Marks & Spencer's bestselling ready meal in Paris is that British classic, chicken tikka masala. The home of camembert, brie and roquefort is even buying British cheese.

Why have the French, long convinced that British food meant boiled meat and jelly, changed their minds? British makers of sandwiches, crumpets, scones and lemon curd say there are many reasons, not least a simple desire for something different in a country with a high-quality but highly traditional food culture.

Increased foreign travel and the vast French population resident in London - said to be France's sixth biggest city - have also played a part in spreading the word that decent food does not end at Calais. Meanwhile, shorter lunch breaks mean good food on the go is increasingly in demand among younger workers.

Marks & Spencer is one retailer that has benefited from increasing demand for convenience, said Jill Bruce, its head of international food. It has 10 stores in Paris selling food - five standalone food stores opened this year and it plans about 20 food stores there by 2016.

Its Beaugrenelle store a few blocks from the Eiffel Tower sells more than 70,000 Indian takeaway meal boxes a year, she said. "Chicken tikka masala is our top selling ready meal in Paris."

Pret A Manger is also capitalising on the growing fashion for lunch "al desko", opening its 11th store in Paris last month and hoping to more than double its business there in the next two to three years, targeting the young office workers who are now aping Brits' lunch habits with avocado and crayfish salads and carrot cake.

John Gleave, senior trade adviser for agri-food, fashion and retail at UK Trade & Investment in Paris, said: "Anything to do with snacking and ready-to-go is growing very quickly in France and a lot of British manufacturers are very good at that."

Pret's marketing director Mark Palmer agreed: "In Paris the quality of food is good but the speed of service is not particularly fast. There was demand for high quality food at pace. Pret offers more variety and innovation than is available in the more traditional areas of the trade. More and more people want a choice of food on the go."

If Pret and Marks & Spencer have created a British food buzz, that is also good news for smaller businesses. While French food firms grapple with a stalling economy and stifling legislation that is hurting growth, their dynamic UK counterparts with their often offbeat and attractive British branding are seizing opportunities.

Devon-based Luscombe Drinks has tripled sales to France in the past two years and expects more growth, while Dart Valley Foods, a Hampshire-based maker of upmarket pickles and preserves, generates 7% of its turnover in France, almost from a standing start five years ago - with dozens of pallets of its bestselling lemon curd shipped each year.

Dart Valley co-founder Michael Jolley said: "French cuisine is of very high quality but it is very much based on accepted rules and regulations. We're producing new and innovative products that the French find exciting."

The Food and Drink Federation said France was Britain's second biggest food export market after Ireland in the first half of this year, with a 9% year-on-year increase to £748m.

Last week the environment secretary, Elizabeth Truss, was in Paris at the SIAL international food exhibition, along with more than 100 British exhibitors, to push for more British success stories, such as Tyrrells, which in effect created France's premium "English crisps" market with Paris-based distributor Fresh Food Village. Tyrrells expects to hit €12m (£9.5m) sales this year in its biggest export market, up from about €10m last year as vintage-inspired packets, with Beetroot, Parsnip & Carrot the star product, win over the French. "We hope for a €20m business there in the next three years," said chief executive David Milner.

Fresh Food Village said: "British food is known for packaging that sets it apart, and more off-the-wall and less serious brand positioning. This is popular with urban customers who expect something new and fun."

And in the country that is said to boast a regional cheese for every day of the year, even British dairies are selling their wares. Ann-Marie Dyas, owner of Bath-based The Fine Cheese Co, said French sales increased by 20% in 2013 and by 53% in the first half of 2014.

Jason Hinds, sales director of Neal's Yard Dairy, thinks London's gastronomic reinvention has helped. "This year we have seen 25% growth in France. We're now getting an inquiry every couple of weeks from Paris restaurants about stocking our cheeses. In the early days we would struggle to even get through the door because of the reputation of British food."