Is the Age of the Quick Pint and Boozy Drinking Over? 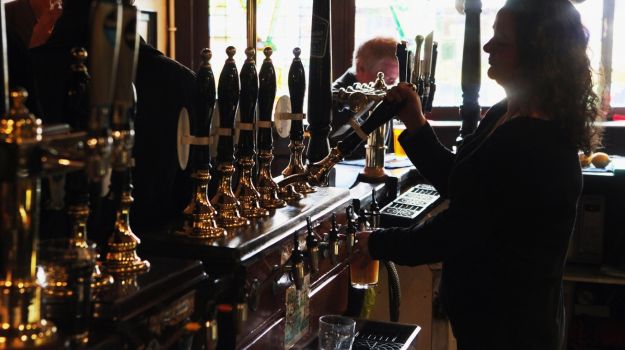 Food for thought ... can pubs get by without going gastro? Photograph: Oli Scarff/Getty Images

As a new report suggests that more than 90% of pub visits involve the eating of food, is the age of the quick pint and boozy drinking den over?

There are certain statistics that stop you in your tracks. For instance, did you know that the Bee Gees have sold more than 200m records? That nearly 10 million people watched the Mrs Brown’s Boys Christmas special? Or that less than one-in-10 visits to the pub are now solely for the purpose of having a drink?

“Sorry, come again?” you may ask of that last factoid, and you would be right to question it. Despite the headlines that greeted this latest research from market analysts NPD, its central thrust – that British pubs are now primarily places to eat rather than drink – is not quiteas dramatic as it first appears. NPD reported that 92 out of every 100 pub visits now involve the consumption of food. But when I asked NPD to clarify this, it transpires that it counts crisps and nuts. “If the panellist considers a pint and crisps as their dinner, they can declare them as such,” said a spokesperson.

That is a less resounding death knell for the quick pint than was reported at the time, but it does not soften NPD’s wider message. For those who bemoan the march of the gastropub and the way that many pubs now marginalise drinkers, this report makes grim reading. There are now 100m breakfasts sold in pubs annually, up 128% since 2008. The number of servings of alcohol in pubs has dropped by more than a quarter over the same period, while consumption of tea and coffee has risen by more than 11%. It appears to confirm what analysts and the huge pub companies have been saying for years: that the pint and the traditional boozer is in decline and, to survive, your local must become a family-friendly, food-led pub.

You can see that happening all around you. Twenty-nine pubs shut each week, and those that survive are, increasingly, places to dine not drink. They are effectively restaurants in former pub spaces. I have nothing against that per se. However, no one could argue that the character of a pub is not hugely altered (that something special is lost, even), in that shift of focus from booze to food. Moreover, while this broad generational change is irrefutable, the propaganda around food-led pubs as the only viable business model has shut out discussion of potential alternatives. There are, although you might not know it, purist drinking dens bucking this rush to food.

The last few years has seen a surge in pubs where you might get a bowl of wasabi peas (the most illogical pub snack ever) or, at most, a cheese barm, but whose offer is very much based around fantastic drinks, not food. The craft beer movement has been a game-changer in that respect, with – to name but a few – Manchester’s Port Street Beer House, Cask Tavern and Smithfield Tavern; Conwy’s Albion; the Black Dove in Brighton; the Wellington and Craven Arms in Birmingham; or the York, Euston and Harrogate Taps all thriving while doing at most the bare minimum of food.

In some ways, the fast-growing micropub movement (small, no-frills pubs) is an implicit kick-back against the rise of shiny, barnlike family food pubs. In Manchester, there has been a remarkable recent growth in suburban bars that exclusively specialise in great beer. Many of these – Heaton Hops in Stockport, the Prairie Schooner in Urmston, BarBeerian in Whitefield – double-up as bottle shops, too, a formula replicated at, for instance, Cardiff’s Gravity Station or Tall Boys in Leeds. The message? Stock high-quality, unusual drinks and that, in itself, can turn a pub into a destination.

That specialism and sense of occasion is something cocktail bars have exploited for years, without feeling the need to serve food. At the same time, a new wave of informal London wine bars, such as Vindinista and Sager + Wilde, while serving food, don’t trouble themselves much beyond short menus comprising small plates, sandwiches, cheeses and charcuterie. Fundamentally, these are places to drink exciting wine. The food is almost incidental.

I love restaurants, but they have a completely different dynamic to pubs and bars. Pubs are democratic, communal, potentially raucous adult spaces in a way that restaurants (almost) never are. And that is something precious. Let us raise a glass, therefore, to those landlords fighting the good fight for the pure appreciation of fine alcohol, the ennobling effects of a boozy atmosphere and a world where you can walk into a pub and not find all the tables reserved for dinner.