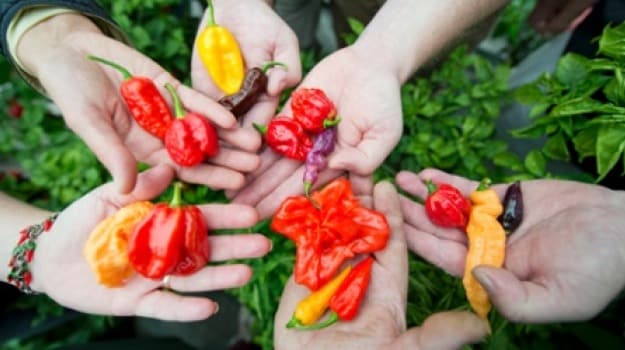 Try a chilli club to see why enthusiasts get hot under the collar about Peach Ghost Scorpions and Bangalore Whippets' Tails ...

My lips are on fire, my tongue is a pin cushion, my whole mouth is screaming for mercy. I didn't know such heat was possible from one little chilli. But this is no normal pepper, it's a Peach Ghost Scorpion (a deceptively elegant name if ever there was one) and I can fully recommend it if you want to think you're dying for 20 minutes.

"The heat is the plant's defence system to stop mammals eating it," explains "Chilli" Dave of Bristol's Clifton Chilli Club. (Or that's what I think he says - my notes for this part of the interview consist of the letters H-O-T scribbled over and over.) He and his friends Jim Booth and Dave MacDonald founded the club five years ago after a trip to Sea Spring Farm, home of the famously hot Dorset Naga chilli, and have been defying chillies' defence systems ever since.

"It's not about the pain," Dave MacDonald adds. "It's the adrenalin rush. You get this charging feeling. You feel euphoric." The club's search for euphoria, aided and abetted by copious amounts of cider, is the subject of hundreds of YouTube videos. Many are filmed at their local pub, the Coach & Horses, and often end in sweats, hiccups, tears and promises to lead a better life. Their tasting notes are stark: "Unapologetic ... life-threatening ... what have we done ... never again." You've never seen a group of people having a better awful time.

These exploits have made them celebrities in the macho world of chilli eating, whose subjects feature names such as Meet Your Maker and Pure Death, and in which the line between bravery and foolishness has burned clean away. Growers and sauce companies send the club their products to review and endorse; festivals book them to host chilli-eating competitions. "We provide the milk, the sick buckets, everything," says Jim.

But all this fire-eating belies the horticultural side of the club. "Everyone here grows their own," says Maggie Fox, who met the group at a chilli festival four years ago. "You come up against a problem, they offer solutions." Their weekly meetings are a valuable resource, a swap shop for seeds, kit and information. And British chilli growers need support: the plants don't like the sudden temperature shifts of our summers or the interminable gloom of our winters.

Not that you would know it standing in the group's polytunnel on the outskirts of town. It groans with extraordinary varieties, many grown for their flavour and looks: stringy Bangalore Whippets' Tails, blushing Pink Tigers, Habaneros like crinkled paper lanterns and an unnerving Alien-type face-hugger specimen called Ubatuba.

Then there are the really mean ones, the super-hot nagas and jolokias. (Super-hot refers to anything over 500,000 Scoville heat units, the recognised scale of chilli heat. A bottle of Tabasco, by comparison, is around 3,000 Scoville units.) These gnarled and twisted specimens are the monsters in the chilli fairytale. As the scene has taken off over the past decade, providing growers with choice and knowledge previously unthinkable, it has also entered its own arms race, trying to generate ever-greater levels of capsaicin, the active ingredient that gives the plants their heat. The Carolina Reaper, currently the world's hottest chilli, measures an average of 1,569,300 Scoville units.

"It's got to the point where the chillies are too hot," says Dave MacDonald. "They're not necessary." With the Ghost Scorpion still fresh in my mind and raw in my mouth, I am inclined to agree.

But "too hot" is not the same thing as saying they won't be eaten, and this is where the Coach & Horses comes in. The pub is the club's official seat of residence - yet despite this honour, the landlord looks wary when the group arrives. Chilli Dave admits there have been errors of judgment. Weapons-grade chilli sprays have gone airborne on occasion; the pub has been evacuated a few times.

Club members see nothing wrong with a bit of heat. In fact, they preach chillies' health benefits. "Some people go to the gym and build up a sweat," Tony Meaney, the group's main grower, tells me. "You eat a chilli, you get the same thing. You get gym junkies and chilli junkies."

"It's a shared passion," adds Becky Hamblin, who runs a chorizo business. "It's the same reason people might join a bridge group. For company, like-mindedness. We're just like normal people, except we put chillies in everything." Becky takes her chipotle pepper grinder to work with her. Chilli Dave, although retired from super-hot chilli eating ("Your body tells you"), has four potent capsules of chilli powder on his keyring "for emergency back-up". Dave MacDonald is partial to drinking his cider with a super-hot chilli in it.

"One time it flicked up, got me straight in the eye," he says. "I couldn't see for 20 minutes." Because he has such understanding friends, the incident was on Facebook before he regained his sight.