How to Eat: Toast 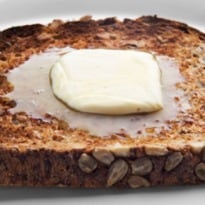 This month, How To Eat is tackling a quintessentially British snack - toast. Sounds simple, right? But how wrong you are. Do you use a toaster or grill? White sliced or rye, sourdough or seeded multigrain? And that's just the start of it...

"It is impossible not to love someone who makes toast for you," wrote Nigel Slater in his food-based memoir,Toast, a statement which is, of course, cobblers. From San Franciscans genuflecting before £2 slices of artisan sourdough to those who swear by Utterly Butterly, we all have very definite opinions about what toast is. Due to its apparent simplicity moreover, we are never more dismayed than when people serve us the wrong toast. How, we howl, can anyone not know how to make toast?

But of course it is not that simple. At its most basic, toast may consist of just two ingredients, bread and fat, but the variables in how it can be made and served are almost endless, as are the prejudices and personal preferences that swirl around it. Which is why, as How To Eat, Word of Mouth's most dictatorial blog, tackles this quintessentially British snack, it does so fully aware that we may never settle on any general rules of good gastronomic conduct. Toast is simply too divisive.

Despite passions running high, please keep it civil below the line: grilling each other is fine, buttering one another up would be better, but if you have someone on the rack, go easy. We don't want anyone to get burned.

Essential, if of secondary importance to the fat used. Fundamentally, served straight from the toaster and sufficiently slathered with the right fat, any toasted bread will provide you with a frisson of exceptional pleasure. Even those gluten-free slices which could be used to protectively clad an exposed coastal property. The thickness of the toast is crucial, too. You want depth (no more than an inch, much less for denser breads), whereby almost instantaneously, in each mouthful, you get a crisp crunch, a brief sensation of pillowy cushioning beneath and then a flood of buttery goodness. Although, that is not to say that there is not a hierarchy among toasting breads.

As a broad rule of thumb, unless you are eating it with a very sweet jam or marmalade, where a dark bread provides a satisfying earthy contrast, avoid brown, wholemeal or seeded multigrain loaves for toasting - in favour of paler/white breads. A lot of the better, darker breads react very badly to toasting, as do their exposed seeds and grains. Heat can turn their surfaces into coarse, withered, carbon-scarred landscapes - like the Australian outback after a bush fire, obliterating any mineral, nutty flavour. For instance, when toasted, rye bread loses any of its depth and allure. It becomes a chore. Meanwhile, sliced supermarket brown breads invariably turn into brittle husks at the merest hint of heat. If I wanted to eat a crispbread (and I really do not), I would eat a crispbread.

If we are talking about toast as a paradisiacal comfort food, which it can be, then you have to go for a sourdough that is glossy, light, open textured and ultra-fresh*. There is something about the sour tang of proper sourdough, the way its acidic notes curl up - like smoke from a guttering candle - around the edges of all that rich buttery flavour that gives toast a new dimension. As a similar treat, a good rustic, lightly toasted white bread, like a Pugliese, is welcome. However, day-to-day, any robust Chorleywood toastie loaf will hit the spot. Regular readers of this blog (sorry, the regular reader) are bored of hearing me big-up Warburton's toastie loaf, but it is the supermarket white-sliced king.

*Yes, you can give stale bread a second life by toasting it, but that is certainly is not ideal. The fresher the bread, the livelier and more engaging the toast.

If you are serious about toast and it is, perhaps, the only thing you should be serious about, grilling it is the only option. The subtext of using a toaster, is this: "I am busy and important. My precious time is worth far more than good toast." By not using a grill, you are buying into the pernicious myth that, as human beings, we can only assert our own agency by working and spending in such a blur of activity that we allow ourselves no time to perfect life's simple pleasures. To do so feels frivolous. It is only toast. Yet, our consequent lack of enjoyment in the end-product, poor toast, not to mention the process of preparing it - and you could so say this about hundreds of activities - is why Western society, for all its choices, distractions and artisan breads, is gripped by a low-level, gnawing dissatisfaction. We consume but we do not enjoy. That is the paradoxical tumour at the heart of 21st century capitalism. Either that, or you use a toaster because you've got kids. One or the other.

If you are determined to get an even, complete-slice tan, one which guarantees crispness across the whole surface with no bready patches, then given the notoriously temperamental nature of toaster settings, the grill is essential. Certain barbarians love burned toast (for shame, Jay Rayner!), but civilised human beings should aim for a colour somewhere on the spectrum from golden brown through russet to, at most, autumnal leaf mulch. Anything darker than that and the toast is overdone.

Not only does grilling allow you to keep a close eye on the toast, so you can ensure it emerges the precise shade you desire, but also it focuses your attention, if only briefly (a blisteringly hot grill will toast bread in around 30 seconds per side), on the important task-in-hand. In placing the grill on the wire rack and turning it (never trust anyone who only toasts bread on one side), you are building anticipation for the feast to come.

There are a significant number of otherwise sane and rational people, who, whilst claiming to take an interest in what they eat and drink, nonetheless use laboratory margarines; unholy buttermilk, olive oil or vegetable "spreads"; and, almost as bad, spreadable butters. All of these are an abomination.

Yes, margarine is marginally cheaper, but use it in your baking or to grease an axle, never on toast. It is the ultimate false economy. Likewise, who cares if the vegetable oil spreads are "better for you"? They may contain (and, blimey, that is another debate entirely) less saturated fats or, even, plant sterols that lower your cholesterol, but more importantly: they taste disgusting. Is that really how you want to eke out your time on earth? Joylessly, in greyscale, denying yourself one of life's great pleasures, in the vain hope of living (if you can call it that), for another few years? Newsflash: we are all dying. Every day. Eat some butter before it is too late. And not that weird, unnecessary spreadable stuff, either. Who keeps butter in the fridge? It should be stored (not the whole pack, just some of it) at room temperature day and night, 24/7, ready for instant, emergency toast application. That edict should extend to hotels and restaurants, too. Serving toast with rock hard butter is the ultimate fail.

From handmade, small-batch butter that tastes as ripe as cheese to bog-standard Anchor, butter is the essential fat for your toast. Bland unsalted will do, at a push (it is lushly creamy), but its rise as a supposedly sophisticated alternative is bizarre. We are not French. And toast certainly loses some of its appeal without that lip-smacking, salty twang. The butter should be applied moreover (using a butter knife, you cannot spread butter with a serrated knife), to such a thickness that, as you lift it to your mouth, you can still see floating yellow islands of melting dairy that have yet to fizzle down into the hot toast.

Many people will view the rise of on-table toasters in cafes as a hipster affectation. "Look at those daft sods, paying to make the food themselves!" But it is perfectly sensible. Toast should be served as hot as possible. By the time you have finished buttering a piece it is at its optimum, and it should be eaten straight away.

That is not always practical however, for instance when sharing toast between a group of people. At those times, you are forced to choose between a toast rack and piled on a plate. Plate is preferable, by far. Yes, the bottom piece may get a little soggy with condensation, but if you are letting the slices stand for that long, then, frankly, you are not eating fast enough. In fact, if it has got too damp, just throw it away and make some more. Given that its temperature is key, allowing toast to huddle together is far preferable to laboriously cutting-up and/or buttering slices and filing them in a toast rack. That is a surefire guarantee of stone-cold toast and who, in their right mind, likes cold toast?

Again, practically, it may be necessary to sub-divide your toast into either two rectangles or two diagonally cut triangles. This is often over exaggerated as a huge schism that divides toast lovers, but, in reality, the two shapes have very different applications. If eating a piece of toast topped with a spread of some sort, triangles are obviously preferable, as they allow you to start at the thin end of the wedge and eat in - without getting said spread all over your face. If you are using the bread to pile stuff on (spoonfuls of boiled egg, for instance) then rectangular toast, with its sturdy, reliable right-angles, is clearly the logical choice.

Tea or coffee. Nothing else works.

Any time. That is the glory of toast. No matter how tired, drunk, distracted or harassed you are, whether it is 3pm or 3am, and particularly at times when you know you want something to eatbut not quite what, toast works every time.

A short note on the tyranny of toast

Understandably, given how great it can be, there is a tendency to try and insert toast into situations where, frankly, it does not work. For example, very few sandwiches benefit from being served on toast, rather fresh bread. And even an apparent classic like beans-on-toast would benefit from coming with a far more manoeuvrable slice of bread on-the-side, to help you mop up the last bean juices. See also, soup. If you want textural contrast in your soup, throw in a few croutons, but how is toast (inflexible, relatively non-absorbent), a preferable accompaniment to bread? Can you wipe your bowl clean with a piece of toast? No. As much as we all love it, do not be afraid to critically question toast.

So, toast. How do you eat yours?

Top Photo: Toast... go on, you know you want to. Photograph: Alamy