'One-Third of Indian Women are Underweight' 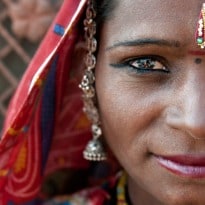 According to UNICEF India, "Malnutrition is more common in India than in Sub-Saharan Africa. One in every three malnourished children in the world lives in India."

Although India seems to have made a satisfactory leap on the Global Hunger Index, yet there is a lot accomplish. According to International Food Policy Research Institute (IFPRI), almost one third of Indian women are still underweight.

"India is making progress against under-nutrition as seen in the 2014 Global Hunger Index recently released by IFPRI. Yet one-third of Indian women and children under five remain
underweight," IFPRI said in the statement.

IFPRI calls for better coordination between the central and the state governments coupled with accelerated efforts to tackle hunger and malnutrition. It is organizing a two-day conference 'Together for Nutrition 2014' where over 200 researchers, government officials and delegates are expected to discuss ways to improve nutrition in Indian children and women.

Listen to the latest songs, only on JioSaavn.com
Ramanan Laxminarayan, Vice-President for Research and Policy, Public Health Foundation of India expresses his views on this issue, "India is home to a third of the world's stunted children. There is a significant opportunity for us to help our children reach their full potential not only through direct feeding programmes but also through improved access to toilets and empowerment of their mothers." Sessions at the conference will highlight research and programme experiences and will take this agenda forward through convergence, collaboration, and cooperation at the state, district, block and community levels. Further, evidence and experiences will be shared from states as diverse as Bihar, Maharashtra, Odisha, Madhya Pradesh and others.