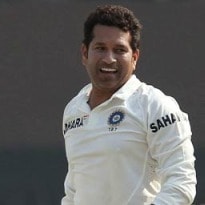 Couldn't make it to the stadium to catch the buzz? Cheer up with this legendary spread. Here's a checklist of Sachin Tendulkar's most loved tastes that will never fail to impress his ardent fans.

We are all well versed with the 'Master Blasters' shots hit and records smashed but a true blue Sachin fan would know that he is also a bonafide foodie.

Sachin's love for food is no surprise. He is a taurean by birth (April, 24th) who are known to be adventurous foodies. And so it won't be a stretch to say that he does harbour a penchant for new cuisines and foods. Not when you may have heard that during the 2003 World Cup Final, when India played against Pakistan, Sachin Tendulkar scored a glorious 98 in 75 balls only on a tub of ice cream! He recounts not having lunch, listening to music with headphones clung to his ears, trying to soothe the worry lines with a tub of ice cream.

Create ice cream at home without an ice cream maker.

As a young boy of 16, Sachin toured Pakistan and fell in love with its cuisine. He is filled with nostalgia as he shares starting his day with lavish kheema paranthas and lassi that would keep him fueled through the day. The aftermath of which was the weighing scale tipping to the wrong side back home!

A taste of cross border recipes

His prowess extends to the kitchen as well. You might not know this but Sachin has sported the chef's hat to cook dinner for his team mates. According to sources, at Ajay Jadeja's house back in the 1997-98, he is known to have cooked baingan ka bharta for his entire team.

He is quite a home chef and dawns the apron for his family to cook fish curry or prawn masala, which he learnt from his mother. Sachin is a big time admirer of delights of the sea especially crabs.

While many regard it as an acquired taste, Sachin Tendulkar happens to be a big fan of Japanese cuisine. He enjoys sushi and sashimi and is credited for having introduced Suresh Raina to Japanese food.

Light up your dinner table with recipes from the 'Land of the Rising Sun'.

His top favourite - No matter where he eats and which fancy restaurant he visits, nothing is better than maa ke haath ka khaana, for Sachin. After all those tedious tours, he would love to curl up with a plateful of 'varan bhaat', the traditional Maharashtrian dal-chawal, drizzled with ghee and a dash of lime. Like most of us do, he enjoys dunking biscuits in his tea. As a young boy he would have a great time competing with his friends off the pitch in 'who-eats-more-vada-pav' competitions.

His bad food days - Sachin Tendulkar had a sour experience when he and his wife tried snails mopped in a garlic sauce. To his disappointment he found it hard to digest and swore never to try it again! His worst food experience was when he was served with rotten seafood.

Sachin Tendulkar co-owns two restaurants in partnership with Sanjay Narang of Mars Restaurants - Tendulkar's in Mumbai and Sachin's in Mumbai & Bangalore. (Now you know where your next table reservation is going to be!). London to him is a great foodie destination where one can smack his lip's over an array of cuisines.