Pizza Hut's Blockbuster Box Isn't Enough: I Want Absolutely Everything Done For Me 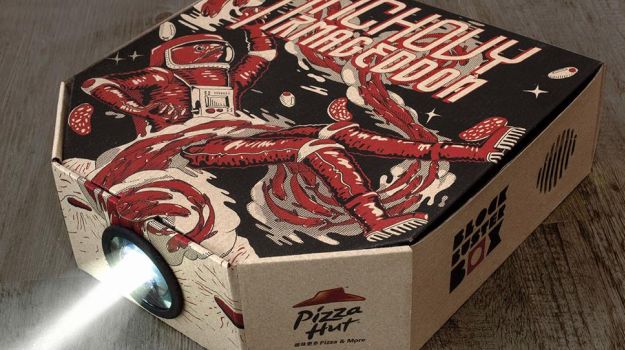 The Blockbuster Box – a pizza box-cum-movie projector – is great, but it’s high time we lived in a world where someone delivers it, eats it and cleans it up too

Pizza Hut has released a pizza box that is also a movie projector. The company will deliver it to your front door. The box comes with a special lens that will beam a movie – played on your iPhone – on to your wall, or screen, or sister.

Obviously it is an advertising stunt, and sadly and it will only be available in Hong Kong.

This is a shame. When Concorde was retired in 2003, Jeremy Clarkson, the popular British television presenter and pugilist, described it as “one giant leap backwards for mankind”, and if the pizza box-as-sub-standard-movie-projector is not brought to the masses, surely the feeling will be similar.

After all, this is the way we are moving as a society.

Think about it. The cinema is rubbish. The worry over whether you’ll get a good seat; the fear that those people behind you might carry on talking through the film; the anxiety that you’ll start needing the bathroom after 10 minutes. The claustrophobia. The price. The noise. The brightness. That’s before you even start to think about whether the film will be any good. (I don’t like going to the cinema.) It’s a much-needed improvement on pizza delivery – an idea as old as time. The Pizza Hut Blockbuster Box solves everything.

Buying things in the real world is rubbish, too. Why should I have to face the embarrassment of going to the local bodega and only buying a toilet roll? Or the (much worse) embarrassment of going to Walgreens to buy condoms? The mortification of having to track down an employee to unlock the Perspex cabinet that guards the condoms, of watching aghast as said employee holds the box aloft, like Charlie Bucket waving around his golden ticket, as he carries them past a line of customers, finally setting them down on the counter like a man proudly placing a bowling trophy on his mantelpiece.

Granted, these problems are already solved by supermarkets.

But where is the next step? What can match the revolutionary zeal of the Pizza Hut Blockbuster Box? Where is the innovation? It’s the 21st century. Some of us live incredibly privileged lives in obscenely wealthy, decadent societies. It’s about time we have more things done for us.

Surely Walmart can figure a way that this can be done for me.

If I want a shoelace, or a single shirt button, someone should bring them to me and apply them. Someone should be typing this for me.

And why am I breathing on my own right now, when I’m in a country that Rick Perry says has access to the best healthcare in the world? Why am I converting my own food into energy? Why are my own kidneys filtering my blood? What is this, Soviet Russia?