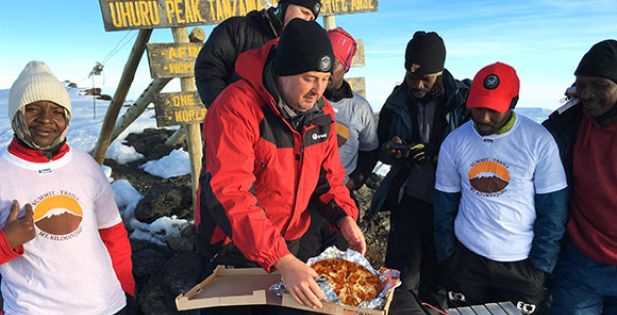 And you were wondering if the pizza delivery person will be able to find your house? Pizza Hut has pulled off an exceptional feat by delivering a pizza at the summit of Mt. Kilimanjaro, Africa's tallest mountain. When Randall Blackford, General Manager, Pizza Hut, Africa along with his team and a group of professional mountaineers reached the top of Kilimanjaro, they had set a unique record - highest altitude pizza delivery on land, ever! The team gorged on the classic pepperoni pizza at the height of 5897m (19347ft) as stated by the Guinness World Records.

The delivery was attempted to celebrate Pizza Hut's launch in the 100th country - Tanzania. According to the details mentioned by the Guinness World Records' official website, Pizza Hut had designed a special heat insulated pizza box backpack to facilitate carrying the pizza to such a great altitude without worrying about it getting spoilt. The team climbed the mountain and opened their pizza box in close to four days' time. The attempt left many exhilarated with Milind Pant, President of Pizza Hut International commenting, "We are thrilled to bring Pizza Hut to Tanzania and believe there is no better way to celebrate our 100th country milestone than by setting a Guinness World Records title for the highest pizza delivery on land to Mt. Kilimanjaro," as quoted on Guinness World Records official website.

According to reports, the classic, cheesy pepperoni pizza was prepared at the newly opened Dar es Salaam chain in Tanzania from where it was flown to the Kilimanjaro airport after which it reached Mount Kilimanjaro National Park. A team of five professional climbers carried the pizza to the base camp at the elevation of 16,000 feet. They were joined by the Pizza Hut Africa General Manager and a few other colleagues to finish the climb in the next four days.

The original plan had helicopters and drones involved, which was chucked over a more intriguing and adrenaline-charged idea of actually climbing the mountain. The funds raised from the attempt went to the Msasani Primary School in Dar Es Salaam, Tanzania. The special, heat-insulated pizza box backpack was designed by Vesture, a company vested with designing regular pizza delivery bags for Pizza Hut.