Should I Eat Chocolate to Relieve Dementia? 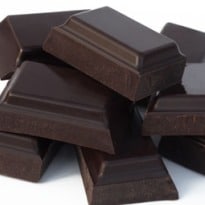 A new study shows that the flavanols in chocolate reduce the risk of Alzheimer's and other dementia conditions by protecting brain cells and increasing blood flow around the brain.

Eating dark chocolate could slow the progression of dementia, says new research from the journal Hypertension.

Dementia is a term for conditions that cause memory loss, an inability to reason or make rational judgments, as well as changes in personality. The main dementias are Alzheimer's (caused by beta amyloid protein in the brain) and vascular dementia (caused by restrictions in the blood supply to the brain eg from high blood pressure). The two types can co-exist, and both get progressively worse over time.

Since dementia is so common (the Alzheimer's Society says that one in 14 people over the age of 65 has some form of dementia), there are many studies looking at how to prevent or stop it progressing. In this particular study from Italy, the researchers randomly divided 90 people over 70 years of age with mild cognitive impairment (an early symptom of dementia, which causes problems such as memory loss and slow recall of memories), into thirds to drink either high (990mg), medium (520mg) or low (45mg) concentrations of a cocoa drink for eight weeks. The cocoa drinks contained flavanols, which are thought to reduce the risk of dementia by protecting brain cells from damage and increasing blood flow around the brain. Those on the highest and medium-concentration cocoa drinks had the best improvements in their cognitive tests. The participants experienced lower blood pressure and lower resistance to insulin, which means the body gets better at absorbing high levels of glucose, which has been found in other studies to reduce the progress of dementia.

So is this enough evidence to go out and buy a lifetime supply of bars?

The study was funded by Mars, which doesn't mean it was biased, but the company would have preferred to find chocolate has a positive effect. It's a small study: 91 people may not be representative of all people over 70 years of age.

There are many bigger studies showing benefits of other interventions. A study in the New England Journal of Medicine of 469 people over the age of 75 found that taking part in leisure activities (such as reading, playing board games, or dancing) once a week reduced the risk of dementia by seven per cent (doing crosswords four times a week reduced the risk by 47%).

Other research has shown that being sociable can stave off dementia. Taking regular exercise may reduce the risk too, as it is thought to make the brain more flexible. There is some evidence that you can reduce your risk by quitting smoking (as it leads to high blood pressure) and not drinking too much alcohol. Eating oily fish is also thought to help - so try to have some of that with your chocolate.