The Battle Against Obesity is About to Get More Complicated | Letters 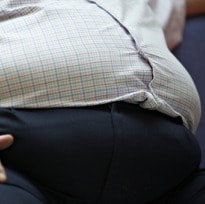 European court of justice may rule that obesity is a disability

Your front-page story "NHS chief urges hospital staff to join gyms in anti-obesity fight" (News) highlights how important an issue obesity is becoming for employers but a case currently before the European court of justice may have the effect of treating obesity as a disability.

Provided schemes such as subsidised gym membership are aimed at all employees, and participation is voluntary, then they do not give rise to any particular concerns. But where employers form individual judgments about the causes of obesity, possibly ones about lifestyle or eating habits, without medical input, they may be accused of acting on stereotypical assumptions. Claims of discrimination may ensue, depending on whether obesity is treated as a disability.

In "The Observer was wrong: our higher education policy is progressive" (News), David Willetts states that increasing the full-time undergraduate fee so that it covers the full cost of teaching most subjects is "a progressive policy spreading educational opportunity and funding it on a fair basis". What he does not acknowledge is that by introducing what is in effect a voucher system the government has completed the task of turning higher education into a private good, the benefits accruing to the individual alone, rather than to both the individual and society. Willetts should admit that, as in the NHS, social welfare and social housing, the aim of the government's higher education policy is to shrink the state and privatise what is left.

A clear statement from the pope

The Roman Catholic church will always be judged on how it engages with victims and survivors of abuse ("The sins of the fathers", Magazine). Unfortunately, the account of the experience of victims in relation to the then Verona Fathers reflects a stark difference of attitude from that of Pope Francis.

I was present at the mass where Pope Francis addressed all victims and survivors of abuse in a Catholic church setting. Where the leader of the now Comboni Missionaries indicates that if anyone (and note the qualification) has been hurt by one of its priests his thoughts and prayers are with them, Pope Francis identified the experience of survivors of abuse and humbly asked forgiveness. He even more profoundly begged forgiveness of those who were not believed or listened to and he praised the courage of survivors in coming forward, recognising how difficult that is in itself.

Evidence shows that paedophiles have on average at least four victims and often significantly more the longer they remain undetected, a profoundly painful reality that all of us in the Catholic church need to recognise. Victims and survivors of abuse will only believe statements from the church when private practice matches public pronouncements.

Pope Francis this year, by approving the removal from ministry of an archbishop accused of abuse who was a papal nuncio and placing him under house arrest and subject to trial in Vatican State, is making a clear statement of intent to all victims.

"The sins of our fathers" shows just how far we yet have to go. Thank you for publishing it.

In his advocacy of contemporary television ("Is British drama taking enough risks?", New Review), Dominic Savage ignores the way the centralised economics of the industry dictate the kind of programmes that television offers. In the 50s and 60s, one-off plays made economically in the studio went out to huge audiences.

Savage argues that "at its best, British TV drama is now able to rival that of films". Fifty years ago, teledrama was streets ahead of British cinema. All teledrama except soaps is now made on film and uses the grammar of cinema, much of it wasted on all but the swankiest domestic screens. Viewers are happy to watch sitcoms and chat shows made in studios on multi-camera video. They would surely accept drama made like this. Such a form would allow writers to widen the output's narrow consensus.

Although a Labour member for over 50 years, I must join Kevin McKenna in welcoming the SNP's Nicola Sturgeon as Scotland's first minister ("A timely ascent to the throne by Nicola Sturgeon", Comment). She worked in the deprived area of Drumchapel for five year and she uses the word "equality" more often than all the Labour leaders put together. If Labour wants to stop her winning the votes of the many Labour supporters who backed independence, then it must offer them policies that tackle poverty, oppose the welfare cuts and promote public services.

Will obesity be classified as a disability? Photograph: Christopher Thomond for the Guardian