The Indian Fruit That You've Probably Never Heard Of! 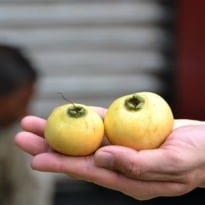 I discovered this fruit while roaming around along with my friend Vikram Khatri on Camac Street in Kolkata. I saw him staring at a fruit vendor's basket and I started staring too. Both of us exclaimed at the same moment. Yeh Kya Hai? (What is this?)

We then went and picked up the fruit. Vikram picked up what I knew as Safed Jamun, a white coloured, pretty looking fruit. The Bengalis call this Jamrul, also known as Bell Fruit or Love Apple or Syzygium Samarangense. Meanwhile I picked up something I'd never seen before. A round, yellow-blush coloured fruit. That looked something in between a peach and an almost-yellow-coloured-mangosteen. The flavour was very distinct 'rose'.
The Rose Flavoured Fruit

I've seen the Bell fruit or Safed Jamun in many different forms across India. The red versions, the pink versions, the white versions and the small Kerala version called Jambakya. And hence didn't share the same excitement as Vikram in his discovery. I just gaped fascinatingly at what the fruit vendor called Gulab Jamun. (More: Foods You Might Not Have Heard Of)It had a very distinct, but at the same time, a pleasant aroma and flavour of rose. But rose as a flavour is not distinct anymore. Probably because what's mostly available and used are the synthetic tasting small bottles of Gulab Jal or Rose water. But the Rose Apple was something completely different. It was subtle, spongy in texture, but not too sweet. What a wonderful fruit. It was love at first bite.

I'm sure the Gulab Jamun fruit or Rose Apple is available elsewhere in India too, but I found this is in Kolkata and this is a very seasonal fruit. The fruit vendor told me that it was available only for a short period in the month of March. The rose apple tree is also widely believed to be the tree sitting under which Buddha got enlightenment. And like many of you, I've always associated Gulab Jamun with the omnipresent dessert, made from fried balls of Khoya dunked rose essence flavoured sugar syrup. But no longer. I'd take the fruit any day over the dessert. Could be that the creation of the dessert was inspired from this fruit. Quite possible, no?

About The Author:
Chowder Singh started blogging in November 2011 on Indian street food, small restaurants and hole-in-the-wall kind of places that in spite of producing brilliant quality food, are largely unrecognised outside of their localities. He believes that these are the real heroes of Indian food, who have been consistently putting out their family recipes over many years and now will hopefully get more recognition for the superb work that they've been doing.

Listen to the latest songs, only on JioSaavn.com
More articles from Chowder Singh:

One of Mumbai's oldest street food: Bhujing
The 160 year old square naan of Hyderabad
This Indian sweet is being made for over 225 years!
Have you ever tried a kala burger?
Nankhatai - The dying Indian 'biskoot'