You Want a Cappuccino With That Haircut? 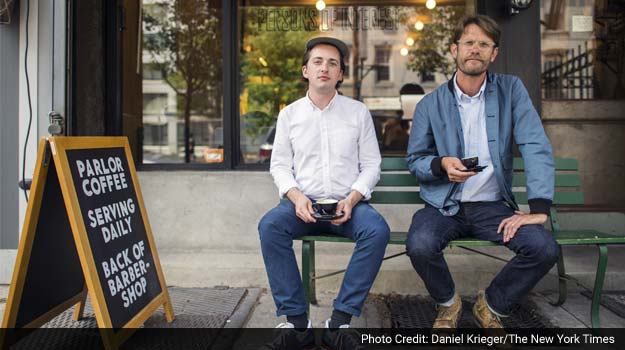 Every couple of weeks, Andrew Livingston, 22, a co-founder of a Brooklyn menswear company, stops on his way home from work for a drink - either a glass of pale ale or an espresso - in a setting where he typically finds like-minded guys.

His destination: the Williamsburg location of Blind Barber, where $45 haircuts are offered alongside 10 types of beer, including four varieties on tap, and cappuccinos made with Blue Bottle coffee and prepared in an airy cafe adjacent to the hairdressing space. Along with his drink order, Livingston gets a trim while seated in one of four vintage salon chairs.

“It’s a nice spot to kind of catch your breath,” he said. “For guys, especially in a place like New York, it’s important to have an environment like that, where you can just kind of destress, chill and talk.”

Blind Barber’s co-founder Jeff Laub said: “It’s not just about making $3 on a coffee. That coffee is supposed to start a conversation, develop a friendship and then hopefully spark something else.”
The cafe-barbershop is a growing trend. Alon Gratch, a clinical psychologist who wrote “If Men Could Talk: Translating the Secret Language of Men,” said that such a place “seems new, in that it provides a space for conversation.”

“It is bridging the gap a little bit and moving in the direction of what women do, but in a more unique 'guy’ way,” he said. “The other traditional places for guys to hang out together are bars, which are very noisy, so there’s no real potential for conversation, or sports events, and the same goes for them.”

Strictly speaking, these establishments do not bar women, but most schedule appointments at tight intervals to accommodate short haircuts. They typically feature straight-razor shaves and beard trims prominently on their concise menus of services.

Catering particularly to a style-conscious clientele, these shops list haircut prices several times that of a traditional men’s walk-in barbershop, and the décor has more in common with a farm-to-table restaurant or menswear boutique than a beauty salon (except for a prominent display of scissors, combs and glass jars of Barbicide).

Although coifs and comestibles would not seem to have much in common, for a specific demographic, a cappuccino made with locally roasted, ethically grown beans is a natural accompaniment to high-caliber haircuts.

“It’s definitely the same group of customers,” said Steve Marks, who owns Persons of Interest, a barbershop that teamed up with Parlor Coffee to serve espresso drinks at its Williamsburg location. “It’s all one piece. The same people who are going to get a great haircut are the same people who are keen to have the best coffee.”

As Dillon Edwards, the founder of Parlor Coffee, put it, “The guy that will spend $45 on a haircut will also spend $5 on a cup of coffee.”

Even in neighborhoods saturated with coffee bars and hair salons, new combination businesses along these lines continue to pop up, having acquired the necessary cafe or liquor licenses. In March, Cotter Barber opened in Brooklyn, complete with a La Marzocco manual espresso machine perched on a reclaimed wood counter in front and four antique barber chairs in back. (It is somewhat more unisex, but the majority of the clientele is male.) At the Williamsburg location of Fellow Barber, coffee service was introduced in February. Both cafe-barbershops get their coffee beans from artisanal roasters (San Francisco’s Four Barrel Coffee and Tandem Coffee of Portland, Maine).

The combination of barbershops and beverages extends well beyond Brooklyn. In Toronto, for example, there is a bar inside Rod, Gun & Barbers, where cigar smoking is also encouraged. In San Francisco, Peoples Barber & Shop serves cold beer, as does the Duke Barber Co. in Philadelphia. The Modern Man, a chain of five salons in Portland, Oregon, offers beer and bourbon from local purveyors. Fellow Barber plans to add a bar to its Detroit location.

In the years before the new breed came along, the popularity of barbershops was on the wane. According to “Encyclopedia of Hair: A Cultural History,” they went into a slump in the mid-'60s, and thousands went out of business. In the '90s, books like “The American Barbershop: A Closer Look at a Disappearing Place,” by Mic Hunter, and “The Vanishing American Barbershop: An Illustrated History of Tonsorial Art 1860-1960,” by Ronald S. Barlow, suggested that they were all but finished.

“They were associated with a generation of postwar men - either World War I or World War II - who had very short hair, very corporate hair,” said Allan Peterkin, a professor of psychiatry at the University of Toronto and the author of three books on men’s grooming. "Then you get into the '60s, with the hippies, and the '70s, with the mustache swingers. In the '70s and '80s, you started to see more unisex salons, when men had more elaborate haircuts, and they thought that the barber couldn’t do it.

“Today, a lot of men are wearing their hair short - the hipsters wear short, short cuts, even if they have bushy beards - so it’s a swing back to shorter hairstyles; barbers were always the ones who were the best at those.”

The cafe-barbershop hybrids are regaining the cultural territory held by barbershops in the days before the decline.

“These combinations are almost like community centers,” said Emma McKay, the executive editor of AskMen, a male-centric website. “In modern society, guys are lacking men-only spaces, and the barbershop still works as a male-first space.”

Stylish men find the environment at such places more inviting than that of a no-frills neighborhood barbershop.

Carlos Garcia, 32, a restaurant management consultant, still goes now and then for the $10 haircut at a walk-in shop near his apartment in Brooklyn, where he waits his turn while sitting in a vinyl-covered chair. But he has found the experience at Cotter Barber to be more pleasant. There, he sits with an Americano in hand; on nice days, he can relax in the shop’s backyard.

“I totally appreciate going in and having coffee I enjoy, since there’s usually a long wait,” Garcia said.

Jon Wilde, an articles editor at GQ who lives in Brooklyn, said the cafe-barbeshops were “making that haircut feel like an experience and not an obligation. These places are inching us toward that hashtag 'treat yourself’ moment, where you don’t mind going and taking care of yourself a little bit.”

Promoted
Listen to the latest songs, only on JioSaavn.com
“Yes, the haircut might be a bit more expensive,” he said, “but you can have a beer if you want, and they are going to take good care of you.”