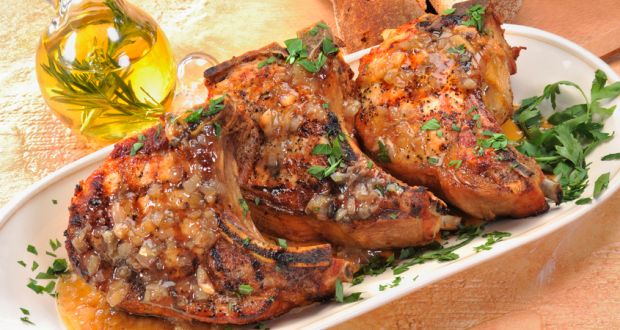 How to make Pork Chops

About Pork Chops Recipe: Pork chops marinated with a home-made garam masala mix, and cooked till tender. Serve with a fruity salad.

How to Make Pork Chops

1.
In a pre-heated pan, add cinnamon, cloves, peppercorns, star anise and fennel seeds, and roast them.
2.
Transfer it into a pestle
3.
Grind the mixture into a powder.

1.
Nicely smother the pork with refined oil and garam masala powder.
2.
Drizzle refined oil in a pre-heated pan.
3.
Add the masala-marinated pork and fry it well. Drizzle honey.
4.
Serve it in a platter with some boiled noodles and apple and cucumber salad.

1.
Take cucumber, apple, spring onions and coriander leaves in a bowl.
2.
Add salt and pepper to taste.
3.
Add sesame and mix it all together.