Perfetto! Italian and Loving It 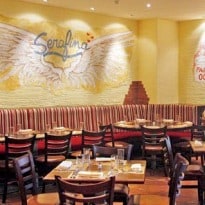 If you just picked up this edition from the Wheeler & Co bookstall at a local train station, this review isn't for you. Don't get me wrong. We aren't suggesting that the reader doesn't make enough money to take the fiance or partner for an expensive dinner on the Diwali weekend based on the fact that you travel by train.

Sure, if you live in an eight-figure apartment in the suburbs and own a fully loaded Japanese hatchback, which you don't use to go to work only because it is tiring and time consuming. That, however, probably wouldn't be enough excuse to shell out `1,800 for lamb chops and nearly `800 for a portion of cheesecake, and over `800 for decent pasta of your choice.

Let's make one thing very clear; we had a very nice meal at Serafina, the just-opened Mumbai outpost of the New York chain of restaurants. The space is big and well-lit; you'll spot a massive pizza oven at the entrance, with colorful murals on the walls but the tables are too many and too close; thankfully, on Monday evening, this isn't an issue.

The portions are generous but the service is elitist and at times, condescending if you don't look visibly loaded. Serafina's food is exceptionally simple, balanced, well thought out and a lot of the menu is the same as their New York Upper West outpost. Di Sofia, its `375-Italian take on the classic Caesar is big, fresh and well-seasoned. The chicken is tender, the dressing is creamy and intensely Italian with a faint aftertaste of mustard; the croutons are light and crunchy.To say that Margherita (`545) with san Marzano tomatoes, fresh mozzarella, basil and olives (which, they proudly claim are not pitted) hits all the right spots would be a gross understatement. The pizza with right amount of sauce and cheese, with a few basil leaves on a thin, perfectly baked crust is as good as any I've had in India or abroad.

The Ravioli Degli Inn Amorati, heart-shaped lobster ravioli in a lobster bisque sauce is humbling, it can make an Italian expat in the city teary. The ravioli is al dente (the menu says clearly that they can cook an overdone pasta to suit the Indian taste on request), and is nice and fat in the center. The lobster filling is simple while the sweet meat does all the talking.

The bisque sprinkled with parsley is nothing but culinary genius. It's creamy and coats the ravioli, beautifully, the extremely finely chopped pieces of zucchini and bell peppers add to the texture. The hero, however, and very rightly so is the unmistakable lobster flavor, its aftertaste stays on for a while. It's perfect. But here's the problem: at `745 (plus a 10 percent service charge and a 4.95 percent service tax), the ravioli becomes passable, suddenly. And, it's not even close to the most expensive pastas on the menu.

The dessert menu doesn't help either. Be prepared to cough up over 600 for a Tiramisu and over 700 for a cheesecake. Keeping my modest budget in mind, I went with Raspberry Sorbet in an Almond Shell that had a slightly cheaper price tag of 575. The sorbet is tangy, the taste of fresh raspberries is refreshing, it isn't icy and the light, crunchy, almond shell is a true testimony to the fine skill of the pastry chef. The vanilla or the chocolate sorbet, which is an option you can go with, would be a better choice with the almond shell.

One would like to say nice things about Serafina because the food is almost flawless but would hesitate before recommending it to friends or colleagues because one can't be sure if they'd prefer to shell out over `2,000 each for a meal accompanied with a glass of good wine. However, if money is no issue, Serafina is a great place to eat.