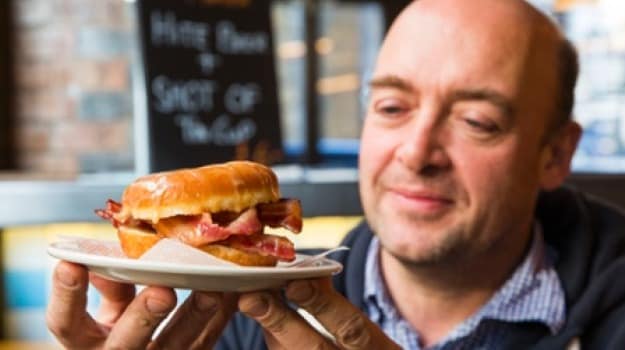 The London restaurant Bird's mashup doughnut - with a dash of maple syrup - sounded so bizarre to our reviewer that he had to eat three.

But still I felt queasy when I heard that the London restaurant Bird was offering bacon-filled doughnuts as part of its breakfast menu. This was, inevitably, in trendy Shoreditch, a short walk from the much-mocked Cereal Killer Café. Was Bird's "fresh plain doughnut filled with thick-cut bacon with maple drizzle" a publicity stunt, or the latest example of the food business's obsession with gussying up classic dishes whether or not they need it?

There's something about doughnuts in particular that brings the "innovators" out of the woodwork. Walk into your local Starbucks and you'll find the Duffin, an allegedly "delicious doughnut-muffin fusion lightly spiced with nutmeg, with a raspberry jam filling and a buttery sugar coating". In the US, Dunkin' Donuts sells a "breakfast sandwich" that combines a sugar-glazed doughnut, pepper-fried eggs and cherrywood-smoked bacon, while Chicken Charlie's "Krispy Kreme sandwich" takes the bold step of teaming up poultry, dough and raspberry jam.

Perhaps Bird was hoping to recreate the success of the Cronut, the deep-fried croissant-doughnut hybrid developed in 2013 by the Dominique Ansel Bakery in Manhattan? At the height of Cronutmania, a single $5 pastry could be resold for as much as $100, spawning imitators on both sides of the Atlantic, in the form of the Cro-Dough, the Doissant, the Doughssant, the Crognet, the Croissnut and the Cro-Not.

Nothing so calculated, according to Bird's founders, Paul Hemings and Cara Ceppetelli. They already sold doughnuts, they wanted to branch out into breakfasts - and they thought their revolting-sounding doughnut-bacon combination would go down well.

To my amazement, it does. What sounds like a sweet and salty mess turns out to be a finely judged marriage, with the doughnut light and surprisingly unsugary, and the stack of streaky bacon providing a crisp and savoury backbone. Even the maple drizzle adds a note of sweetness, rather than overpowering everything.

Just to check my tastebuds aren't playing up, I order a second doughnut, then ask if I can take one home. While I'm waiting for it to be boxed, I ask if there are any plans for the menu. "Well," says Hemings, "sausage and eggs on a doughnut would be brilliant ...".