The Inside Scoop: Here's What Was on the Menu When Sanjeev Kapoor Curated a Dinner for PM Modi in the UAE 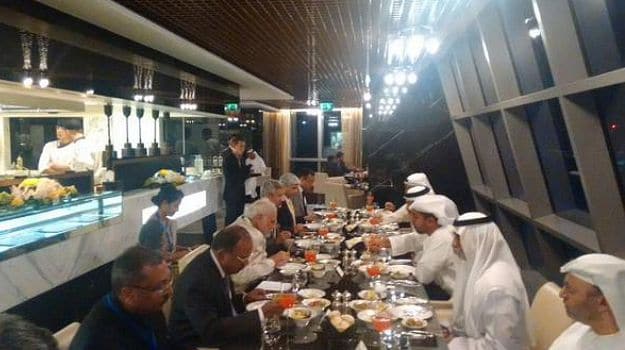 CommentsPrime Minister Modi left on Sunday to the UAE for a two-day visit which is also the first by an Indian PM in 34 years. On his first day in the Emirates, he met the Managing Director of Abu Dhabi Investment Authority (ADIA), an organisation that holds $800 billion sovereign wealth fund of the oil-rich Gulf country.

PM @narendramodi : There are 700 flights btw India & U.A.E but it took 34 years 4 an Indian PM to visit.I promise this will not happen again

PM Modi believes that India’s potential and UAE’s power can help shape Asia’s future and that India is a great investment destination. But as he discussed investment opportunities over dinner, chef Sanjeev Kapoor who was exclusively flown in, toiled away in the kitchen to dish out a royal Gujarati feast.

Star chef @SanjeevKapoor was flown in by UAE hosts for a special vegetarian menu in honour of PM @narendramodipic.twitter.com/p532mKfK8i

Sanjeev Kapoor, one of the top chefs in India, humbly acknowledged that it was a great honour to have been chosen to craft this historic dinner. A popular television personality, he also owns a string of restaurants including one called Signature in the UAE which serves modern Indian food.

Moving on to the menu: The Farsaan and Mezzeh platter was a perfect way to celebrate both Gujarati cuisine as well as middle-eastern food. There was Fafda Chutney, Fatoush, Beiruti Hummus and even Lauki Kachumber. For main course, there was a select vegetarian and non-vegetarian menu, handcrafted with care.