400,000 Products Up For Grabs at International Food Fair 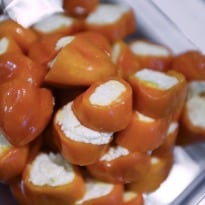 Acai, Kimchi, Black Garlic and Yuzu juice: countries are vying to conquer global plates, and palates, with their homegrown specialities at the International Food Fair which opened in Paris recently. From Brazil to South Korea, 105 countries boasting 400,000 products were present at SIAL (Salon International de l'Agroalimentaire, Global Food Show), which offers a window into the future of food, from traditional know-how that could make its way onto modern plates to high-tech inventions.

After a few lethargic years due to the economic crisis in Europe, innovation is back on the table with 1,700 new concepts served up at this year's edition of the food show. "The market is going to explode with nine billion humans to feed in the next 30-40 years. You need to position yourself now," said Nicolas Trentesaux, president of the exhibition. "Especially with the explosion of the middle class in Asia and even Africa who all want access to diversity in their food."

The food fair, celebrating its 50th edition, has grown ten percent in two years, both in size and number of exhibitors, he said. "The companies here want to export to the whole world," said Trentesaux.

South Korea, present for the second time, has brought 28 companies keen to make themselves known. "Compared to Japan or China, our products are still largely unknown," said Kim Young Bum, director of the Korea Agro-Fisheries Trade Organisation. On display are large clay pots showing the process used to ferment vegetables and make Kimchi, a staple of the Korean diet, as well as novel dishes such as Algae Chips, Algae Marmalade and Smoked Oysters.While already well-known for dishes such as sushi, miso soup and ramen, Japan believes it still has something new to offer global palates. Black garlic - a Kyoto speciality in which the herb is caramelised - buckwheat noodles, leek oil and organic juice from the citrus fruit yuzu are all on show. "We aren't here necessarily to sign contracts but above all to make ourselves known," said Yuzuke Kuzuhara, director of food processing for Japan External Trade Organisation.

Brazil, already a massive exporter of coffee, sugar, soya, beef, chicken and fruit juice, hopes to reap some one billion dollars in new contracts at the food show. "The European Union is a very important market," said Rafael Prodo of the Brazilian Trade and Investment Promotion Agency.

Aside from raw products, Brazil also hopes to promote much-loved specialities such as Acai berries - the fruit of a palm tree grown in the Amazon - delicious when juiced and considered a "superfood" for their antioxidant qualities.

Xavier Terlet, a specialist in food innovation working for the food show, said the industry had to adapt to new demands from consumers.

On one hand, consumers are becoming more sensitive to food waste.

Listen to the latest songs, only on JioSaavn.com
"The industry has yet to understand this behaviour, it continues to promote family formats, overpackaging rather than smaller doses, like a 100 gram (3.75 ounces) packet of flour to make one cake," he said.

There is also a return to a culture of "do-it-yourself" amongst some cooks, whether for pleasure or to save money. Companies "are targeting the production of foods with a kit to produce your own beer at home, or to grow mushrooms in coffee dregs."

CommentsThe food show is on until Thursday.