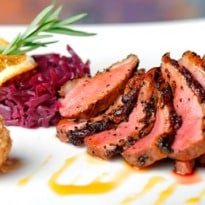 Where does Peking Duck come from? It is a trick question: the dish named for China's capital has its origins in Nanjing, hundreds of kilometres to the south. The tidbit is one of the revelations in a museum opened earlier this month to mark the 150th anniversary of the Quanjude restaurant, now the seven-storey flagship of a chain with franchises as far away as Australia.

Statues of roasters, photos of officials dining and menus going back 100 years trace the duck's route from humble waterfowl to culinary institution.

No secret ingredients are revealed, but around 20 models detail each stage of the duck's journey to the plate. Slaughtered when it weighs around three kilos, pumped full of air to separate skin from fat, the bird is gutted and filled with boiling water to help a sweet basting syrup penetrate the meat before being dried, coated and roasted.

"The baking time is about 50 minutes," a museum panel reads. "The roast duck coming out of the oven looks plump, in a colour of jujube red all over its body, full of oily luster, with a crisp skin, a fresh and tender mouthfeel, tasting delicious but not oily, bearing a subtle fragrance of the fruit tree."

A roast duck style was first developed in the court kitchens of Nanjing, China's then capital in the eastern province of Jiangsu, and the dish only came to Beijing when the Ming dynasty Yongle emperor moved his seat north in the 15th century.

Fuchsia Dunlop, a British writer who specialises in Chinese food, describes today's Peking duck as "a more recent innovation". "When Quanjude was set up, in 1864, the guy who started it employed some chefs who worked in the imperial palace and they used this hanging up technique from imperial kitchens to roast the duck," she said.

"It's a clay oven, with the ducks hanging inside, with a fruit wood fire in the mouth of the oven." Once cooked the bird is dissected at the table by a skilled chef, his hands usually protected from the heat only by a flimsy plastic glove as he reduces the carcass to precise sections of meat and slivers of crispy skin. "If he has a good cut, he can cut it into a hundred slices," says Dunlop.

At the restaurant, diner He Yufan said: "When I watch the chef cut it, he makes it look like art. That's why it feels good to eat it." Her friend Guo Jin was indifferent to the birthplace of the dish. "Beijing is the only place in the world that has authentic Peking duck," she said. "You can't get this anywhere else."

According to Quanjude, which boasts of having sold 196 million ducks around the world, the dish has played its part in Chinese international relations. Its chefs would accompany Chinese diplomatic missions and pictures in the museum show Henry Kissinger and Richard Nixon, who made a landmark visit to China in 1972, eating duck.

"Ping-Pong diplomacy, Maotai diplomacy and roast duck diplomacy were once called the three great diplomatic manoeuvres of China by (former Premier) Zhou Enlai," a panel says, referring to China's pungent fermented sorghum spirit. On one occasion, Zhou dined with Charlie Chaplin in 1954 in Geneva, where the British actor was living in exile from the US after questions were raised over his alleged Communist sympathies.

"I have a special feeling for ducks," Chaplin is quoted as telling Zhou. "I created a character who is hilarious when walking, and his posture is from the duck, so I do not eat duck as a rule. But I will break rules this time."

There has been talk of Beijing applying next year to have Chinese food included on UNESCO's list of global intangible cultural heritage, which so far only includes a few culinary items, among them French haute cuisine and Japanese dietary customs called washoku.

According to Dunlop the Quanjude museum is part of a nationwide trend to showcase China's gastronomic traditions. She attributes the phenomenon to a hugely popular television programme, "A Bite of China", that highlighted different areas' cuisines and dishes.

Promoted
Listen to the latest songs, only on JioSaavn.com
"Lots of their cooking techniques have existed for centuries and are very specific, depending on the region they are coming from in this huge country," she said. The show "encouraged people to stop taking it for granted, showed them it's something to be proud of and learn about, and tell the outside world about", she added.

It "seems to have really woken Chinese people up to the fact that they have an amazing food culture and it's part of their heritage".