Bombay Duck (Bombil): Why is This Delicate Fish Called 'Duck'

The Bombay duck or Bombil is a very curiously-named fish, and there are lots of reasons that try to explain it. 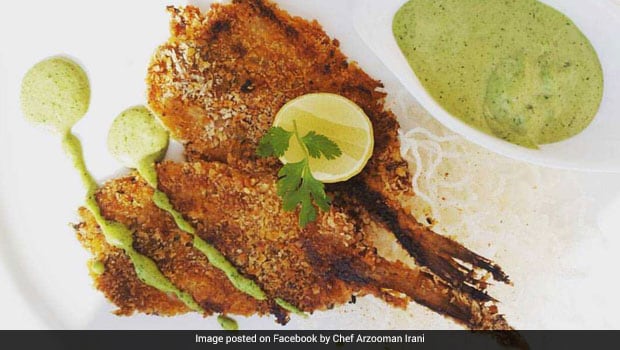 Whenever I have to entertain visitors from out of town, the first thing I do is take them to a seafood restaurant, and stuff them silly with Bombil or Bombay duck. Of course you know that Bombil is not actually a duck; it is in fact, a very fleshy fish, and it is found only in the waters around Mumbai. In fact, there is a legend explaining this. The story goes that when Lord Rama was building a bridge to Lanka, he sought the help of all the fish in the sea. All obliged, but for the stubborn little Bombil. In a fit of rage, Rama flung it aside, and it plopped into the seas near Mumbai. This also explained away the softness of its bones.

What's in a Name?

The Bombay duck is a very curiously-named fish, and there are lots of reasons that try to explain it. Two of them come from Bombay, Meri Jaan: Writings on Mumbai (edited by Naresh Fernandes and Jerry Pinto). From extracts that have been plucked from texts such as the seminal Hobson Jobson: A Glossary of Colloquial Anglo-Indian Words and Phrases, and of Kindred Terms, Etymological, Historical, Geographical and Discursive (Col. Henry Yule and A. C Burnell) and Hanklyn-Janklyn or a Stranger's Rumble-Tumble: Guide to Some Words, Customs, and Quiddities Indian and Indo-British (Nigel Hankin), we learn that name is an Anglicism from the bazaar cry in Marathi, 'bomil tak' - here is Bombil. Another explanation is "the form Bombay Duck has an anology to Digby chicks which are sold in London shops, also a kind of dried fish."

And Farrukh Dhondy, who has written an entire book called Bombay Duck, explains away the name thus. "In fact, it should be spelt as Bombay Dak...when the British introduced the railway system to western India under their Raj, it (Bombil) started going in wagonloads to the interior from Bombay. The crates stank of dried fish...They were marked 'Bombay Dak', literally 'Bombay Mail'. At the time, the railway was run by whites. The English may call a spade a spade, but they don't call 'stinking fish' by that name. They referred to it euphemistically as 'Bombay Dak', the Bombay Mail."

The Bombay Duck and the British

Contrary to popular assumptions, the British took to Bombay duck fairly well. Stink notwithstanding, quite a bit of it was taken to England and enjoyed as well. Maria Graham, a travel writer of the 19th C, wrote, "the bumbelo is like a large sand-eel; it is dried in the sun, and is usually eaten at breakfast with kedgeree" (a British version of khichdi).

Of course, they named it all sorts of things - bumbelo, like Ms Graham, bummalow or bobil, even bambulim (as per old Portuguese dictionaries). Bombay, Meri Jaan further tells us that, Bombay duck "was a name used by Europeans in other parts of India for their compatriots living in Bombay."

Bombay and the Bombay duck

Mumbai has always had a bit of a love affair with the Bombay duck, and it is an especial favourite of the Parsis. Soft, fleshy and portly, we buy it fresh and fry it in rawa until brown and crisp-skinned, while keeping the inside tender and gelatinous. It is quite a delicate fish and falls apart very easily. You can get it cooked this way at places such as Britannia. At home, you would most likely accompany it with sweet-sour gorkeri pickle, although I always eat them by myself.

Dried Bombil (we call it boomla) is insinuated into a sukka boomla no patio or pickle, to be eaten with khichdi or dal chawal. My dad even remembers my grandmother roasting the dried Bombil over a charcoal fire and eating it, just as is.

An excellent place to try Bombil is also at the various Malvani restaurants flung across the city: they remove the water in the fish, to help it crisp up even further - so crisp that it shatters in your mouth, almost like wafers. One of my favourite places to eat it like this is at Acharekar's Malvan Kutta, where it comes in a seafood thali with a rassa, sol kadi, chawal and thick chapatis.

In fact, the Bombil is beloved to many communities, so beloved that we have eaten it nearly to extinction. Overfishing has led to the depletion of many of our favourite seafood species, including prawn, pomfret, and of course Bombil; and one way to prevent this, is to only buy it in the months of April, May, June, July, August, and September, in order to allow it to spawn.

A recipe lurks below, but before I yield it I'd like to point out that Bombil (like most food) appears also to be irrevocably bound with caste. According to Shailaja Paik's Dalit Women's Education in Modern India: Double Discrimination, "While some elite Dalits found the pungent smell of Bombil nauseating, others experienced a waft of Bombil and Sukat (small dry fish) as particularly appetising. In other words, bombil-bhaakri was a delicacy for lower-class Dalits..."

1. Slather it with 2 tbsp salt and flour and keep aside. Rinse it off, then place a weight on the bombil, and squeeze out the water.

2. Peel and chop the garlic and onions finely, and fry them in ghee in a flat non-stick pan. Add 1 tsp flour to thicken, vinegar, and 5 tbsp water. Next, add the coriander and chilli. Once it sputters, add in the bombil. Season. The fish cooks really fast, and is extremely delicate, so be careful when turning. Serve with thin rotis.