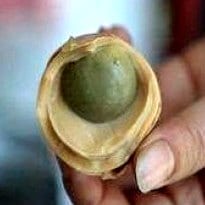 Eggs have always been one of my favourites. I love them for their versatility since they can be fried, poached, scrambled or simply boiled. Personally, I like them sunny side up. As a child, I would gleam at the bright yellow yolk wiggling in the centre of the cooked egg. My eyes would widen in wonder to see the yolk slowly ooze out and drop on the loaf of bread. Ah, good old days!

So, how do you like to cook your eggs? Different countries cook up their own versions of egg delicacies. From Spanish omelettes and American Eggs Benedict to Italian Frittatas and our very own egg curry and bhurji, there are choices galore. It's also good to deviate from the usual, but some people have taken creativity a bit too far with eggs. We've dug out the most shocking egg dishes from around the world. I don't know about you, but I am not sure if I could wake up to any of these. In Pictures: Foods that will scare you

They are dark brown in colour with a moss green/blackish slimy center. Century eggs refer to special Chinese preparation wherein chicken/quail/duck eggs are preserved in a mixture of clay, ash, salt, quick lime and rice hulls for weeks or months before being consumed. The catch is that the eggs are known to emit a strong urine-like odour owing to its high sulphur and ammonia content. (More: Terrifying treats in the world)

This is something that I could have never imagined! How many of you like to have boiled eggs? Well, if you ever happen to be in Zhejiang province of China, chances are that you might get a 'virgin boy egg' served on your plate!

Dongyang City is in the center of the Chinese province of Zhejiang. People of Dongyang City follow a tradition where boys aged 10 years or younger urinate in a bucket and this is then used to boil eggs. Eggs are first boiled in urine with shells and for the second time with their shells cracked. That's not all, virgin boy eggs are known for their great health benefits as reported by the locals.

This is a special Thai salad that has duck eggs. That's not all, the eggs are preserved long enough to become gelatin-like and dark brown in colour. Duck eggs are preserved in a mixture of black tea leaves, salt, sodium carbonate, calcium oxide, zinc oxide and water. (Now Serving, Rat on Stick!)

This is considered to be one of the most delectable dishes in Thailand. Imagine eating a dish prepared with red ants and their eggs! People who have tried it say that the ants taste lemony while the eggs have a buttery texture.

BalutThis is more than an 'I-dare-you-to eat-this' dish. Balut is a duck embryo which is still developing. It is boiled alive and eaten in the shell. It is a popular street food in Philippines.

Much to my surprise, many people did actually like it after taking up the challenge. If I was in their place, I would fainted at the mere sight of it. Similar to Balut is Thai Khai Khao which is also a dish of boiled fetal eggs. (More:The Most Disturbing Meal Ever!)

If all these are a tad too elaborate for you, turn to our good old egg recipes that are simple and satisfying.