A Cure that Ails You? Bacon Fans Don't Mind 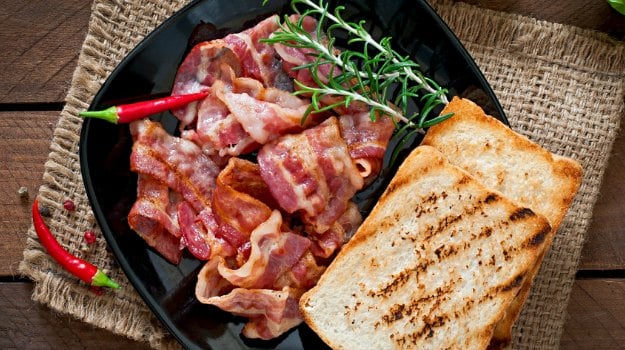 Do you eat bacon? Oh. You might want to sit down for this. I'm very sorry to be the one to break this to you, but you're probably going to get cancer and die. I hope you have your affairs in order. At least, that's how some people interpreted the news of a World Health Organization study released Monday that classified processed meat as carcinogenic to humans and red meat as "probably carcinogenic to humans." (So you're saying there's a chance?) It was only a matter of time before bacon and hot dogs took their place on the epic grocery list of foods that have been linked to cancer, which includes salted fish, dairy, microwave popcorn, farmed salmon and soda, among others.

Upon hearing the news, the Internet - the place where blogs like This Is Why You're Fat aggregate recipes for bacon mac-and-cheese pie with a bacon lattice, or enthusiasts create dancing bacon gifs - promptly gave up on life. After all, we're going to die of something, and we might as well shuffle off this mortal coil while happily noshing on chocolate-covered bacon, right? On Twitter, someone who calls himself @Bigg_dubb wrote, "If a strip of bacon takes four minutes off your life, I should have died around 1846." As another meme put it: "Vegetarians live up to nine years longer than meat-eaters. Nine horrible, worthless, baconless years."

When Josh Saltzman, an owner of Washington establishments Ivy and Coney, a hot dog bar, and barbecue restaurant Kangaroo Boxing Club, read the news Monday morning, he had "a good chuckle," he said. "I've never met an immortal vegetarian, so I'll welcome my bacon-lined coffin." He wasn't too worried about his businesses, where the main attractions are Chicago-style hot dogs at the former and a sandwich called "Three little pigs" (pulled pork, peppered ham and bacon) at the latter. "I don't think it will change a damn thing," Saltzman said. "The Chicago dog has relish that looks like neon-green nuclear waste, and if that doesn't stop someone from eating a hot dog, nothing will. Nothing."It was a particularly bad day to be the CEO of BaconFreak.com. The e-commerce Web site (tagline: "BACON IS MEAT CANDY™") offers 1,100 premium bacon products, from bacon-of-the-month clubs to novelties like sizzling-bacon incense ($3.95), "canned haminal" plush toys ($16.95) and couples' T-shirts that read "Bacon saved our marriage."

"We're trying to just keep our chin up today," said chief executive Rocco Loosbrock, who has a bacon named after him - "Rocco's Private Reserve Sun-Dried Tomato Bacon," great in BLTs. Loosbrock founded his company, which does $5 million in business a year, in 2001, when the turbaconducken, a bacon-wrapped turkey stuffed with a duck stuffed with a chicken, was just a glimmer in one hungry man's eye. He also owns Bacon Today, a Web site for bacon memes and recipes, which his staff tests every week. "So we're always smelling bacon here," he said, "and yes, it does make my mouth water."

But he doesn't eat it every day. He said he believes in moderation and thinks that his customers do, too - despite the "Anytime is Bacon Time" mugs he sells. "I was just thinking of that lady who was in the news the other day who said the reason she lived to be 116 was that she ate bacon every day," he said. Besides, "I do cardio." Bacon and hot dogs aren't the only meats that have been fingered. Processed meat is a broad category encompassing many beloved foods worldwide, ordinary and gourmet. So auf wiedersehen, kielbasa. Pastrami, we hardly knew ye. Lo siento, jamón pata negra. We'll miss you, mortadella. Je suis désolé, pâté.

As for the ruling on red meat, there's some wiggle room in that "probably," giving steak-lovers a glimmer of hope. After all, coffee caused cancer, until it didn't. You can feel the contortion act that led to media statements like this one, from bacon and pepperoni-maker Hormel: "Meat is nutrient dense and contains high quality proteins, essential amino acids, thiamin (vitamin B1), riboflavin (B2), niacin (B3), vitamin B6, and vitamin B12 (animal foods are the only naturally occurring sources of B12). These very important nutrients in meat far outweigh any theoretical hazard."

Many meat-lovers pointed to nitrates, which are chemicals used as preservatives, as the true villain. "We don't buy anything pre-processed," said Michael Bonk, executive chef of the Pig restaurant in Washington, which goes through 250 to 400 pounds of bacon a week. "When we make our bacon, we don't use nitrates - just a simple salt cure." He said he expects that his guests will ask their servers questions about it this week, but then it will blow over. "It's one of those things. It's going to get traction for a couple of days and then Donald Trump will do something."

For animal rights activists, the day's news was like Christmas come early. PETA issued a statement from its president, Ingrid Newkirk, offering anyone interested in quitting meat a free vegan starter kit, complete with recipes and meal plans as well as a personal vegan mentor. "Our lives may just depend on choosing a veggie burger over a bratwurst," she said. But the vegan bandwagoning might have the opposite effect on stubborn meat-eaters. "I think a lot of people here, they're here drinking our aged Manhattan and bourbon, and they'll be like, let me get double bacon now," said Bonk. Over at Kangaroo Boxing Club, that's what Saltzman is planning to do. "I might eat a couple of strips this weekend as an [expletive] to the writers of the journal article," he said. "People have been eating this stuff for years, and the world's still here."