A Fruitcake Recipe that Finishes with a Big Bang 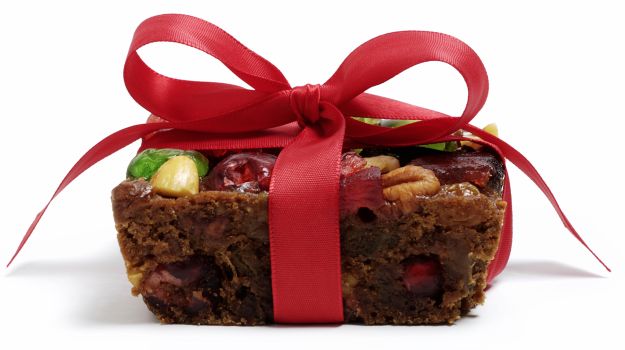 Like many people, I thought fruitcakes -- like Twinkies -- came wrapped and packaged and were the kind of food that goes into the fallout shelter with you. It never occurred to me that real people made fruitcakes and consumed them in real time.

My mother had a stack of untouched fruitcakes in tins from long-gone retailers like S.S. Pierce. I found a few in the cupboard last month as I was cleaning out her house. Still virginal, and probably still safe to eat in the case of a nuclear attack.

Then I married into my husband's Irish family.

Michael comes from a long line of professional bakers who make fruitcakes for holiday giving with their own little floury hands. (Family lore is that his grandfather actually was the inventor of Marshmallow Fluff and was robbed of the glory.)

Grandfather Hynes' fruitcake recipe for 40 loaves was part of the bounty of our marriage. We had our friend the pastry chef adapt the recipe for our wedding cake, doing the math to make it come out as three-tiered edible greatness. Everyone went home with a healthy chunk. My mother kept one whole layer of the cake for herself in her fridge, and for the next 10 years she had a slice of it for dinner with a healthy shot of Maker's Mark.

Weddings were just fine, I learned, but the real fruitcake moment was Christmas. According to my sister-in-law Maryellen, making Grandfather Hynes' fruitcakes was the most special and sacred childhood holiday ritual in their Worcester, Mass., household.

Every year, the children and their father would grate, mix and steep the fruit, then bake and wrap dozens of cakes to give to family and friends and other fruitcake-poor households. And the weekend to do it was the weekend immediately after Thanksgiving. Fruitcakes, Maryellen explained to me, "need time for the fruitcake to mature."

So she came up to our house for Thanksgiving with a plan to use the rest of the weekend to re-create the treasured memory of fruitcakes past with her brother. She had it all planned. (She is a very organized person). The two would bond over their reminiscences and perhaps a healthy shot or two of Jamesons.

She went to the store and bought 48 small stainless loaf pans along with several bottles of spirits, sacks of aromatic spices, flour, and sugar, bags and bags of dried fruit and nuts, and two enormous cans of Crisco. I was surprised Crisco was even still available - and shocked to see that the label proclaimed it both "Transfats Free" and Kosher. Who knew? She needed to buy a lot since this was going to be an annual tradition in my house, I was informed. I vetoed the Crisco and opted for butter.

I had some problems with this idea. Specifically, that weekend we were doing a big neighborhood Sunday brunch to celebrate my daughter's recent engagement. Industrial-scale fruitcake making tends to take over the kitchen for a number of days and makes putting together an elegant brunch for 30 a bit of a challenge. Secondly, her brother (my husband, remember) had absolutely no interest in the project. He'd long ago moved on from baking to tinkering with robots and software. And my daughters just thought it was plain weird. That left me as the designated helper, and a tad grumpy about the whole enterprise.

We got out my bathtub-scaled mixing bowls and began to mix the batter. We began with our spatulas and spoons, but by the end we were up to our elbows in the batter. Fruitcake batter is a turgid proposition and as a result a very good upper-arm workout.

By early Sunday morning, the batter was ready. The kitchen began to smell like a pub. We were a little woozy just from the waft of the alcohol, but I assumed that was a bonus. Maybe we'd been just a little overgenerous with the Jameson's?

Once all the tins were filled to perfection, we loaded them in neat rows in my heavy duty, professional-quality Viking range. The kind with the door that closes so firmly it takes two hands to open. I cleaned up the kitchen and went in to glare at my husband sitting in front of his computer.

Suddenly, a huge boom! Kids rolling out of bed. Windows rattling. A terrorist attack? A plane falling out of the sky? Should we call 911? I ran into the kitchen -- the direction of the bomb. What I saw was the doors blown open on my two ovens and the kitchen window with a spider web of cracks and a sweet mist of spirits. The fruitcakes were still innocently baking in their tiny tins. The Jameson's and port had evaporated with a bang. I closed the oven doors, took an extra nip of Jameson's for my nerves and decided never again.

But the fruitcakes were delicious. And every single person who received one raved about it as the first and only fruitcake they'd ever eaten and enjoyed. And we still have the tins, right? And so here we are again, making the fruitcakes, and I share Grandfather Hynes' special Irish fruitcake recipe with you all.

You can use this recipe to make 40 loaves by scaling up the ingredients by 10. You'll need a lot more whiskey!

1 bottle or more of good quality port, Irish whiskey etc. You'll need enough to cover the currants and raisins as they soak overnight

2. Let the dried currants, raisin and citron steep overnight in the port or whiskey.

3. Cream the sugar, eggs and butter (or shortening).

5. Add the flour and baking soda and mix well.

6. Add the steeped dry fruits and mix until well incorporated.

7. Pour the batter into greased pans.

8. Place the cherries in the loaf pans by hand. Bury a row of cherries, evenly spaced, in the batter so each slice has a cherry for color and flavor.

9. Bake for 2 hours, checking for doneness by inserting a toothpick into the center.

10. Cool the fruitcakes in pans placed on a rack.

Note: Tipple on any remaining whiskey -- especially if its Jameson's. It will make the fruitcake much more delicious.