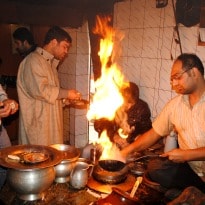 If you have eaten harisa once, you simply cannot ignore it, goes the old saying in Kashmir.

As the winter chill becomes more biting, Kashmiris are using traditional foods that have sustained them over the centuries to brave the fury of the freezing temperatures. One of the choice foods prepared only during the winter months and eaten with gusto at special places in old and uptown Srinagar city is 'harisa'.

While many locals have now started making the mutton-based preparation in their homes, the best harisa still comes from traditional cooks known as 'harisa garows'.

The high-calorie delicacy requires long hours of preparation, which includes removing bones from the mutton, mincing it vigorously and mixing it with foeniculum seeds, cooked rice, cinnamon, cardamom and salt to taste.

Harisa is cooked for the entire night by traditional cooks in huge vessels over simmering fires, with the alert cooks stirring with a long wooden staff to ensure that the broth does not stick to the vessel's bottom.

Zahoor Ahmad, 39, has his harisa shop in Srinagar's Ali Kadal area. Zahoor's father and grandfather have been renowned Harisa makers of the city and many buyers believe the best stuff is still sold at this small shop and a few others situated in Srinagar's old city areas.

"It needs a minimum of eight hours to make the best preparation and this is done during the night," Zahoor told IANS.

At first light, Zahoor leaves his shop for morning prayers at a nearby mosque. When he returns, the shop is abuzz with activity.Buyers who had deposited their tiffin carriers and nickel-coated copper vessels arrive in vehicles from different parts of the city to carry the preparation home.

Many locals of the area come to eat inside the shop, where Zahoor adds boiling edible oil to the plates of Harisa laid for his customers.


The same practice is followed at another well-known harisa shop at Jamalatta in Nawa Kadal. As the hot oil sizzles, the aroma of harisa fills the shop.

"Normally, one cannot eat more than half a kilogram of harisa at one time. If you have eaten it in the morning, it makes for a full meal for the entire day. It keeps you warm and gives energy to brave the winter cold," said a customer who comes once a week from north Kashmir's Ganderbal district to eat at the one of the harisa shops in the old city and also carry home some in a tiffin carrier for his family.

As mutton prices rise, so does the price of harisa. Zahoor said it was sold for Rs.450 per kg last year.

"Because of the increase in mutton prices we are selling harisa at Rs.550 per kilogram this year," other sellers told IANS.

Those who wouldn't compromise on quality don't mind the price increase.

"Every harisa seller is charging the same rate these days," said one of the buyers.

The more affluent Kashmiri families have since some years started the practice of sending large quantities of Harisa to the families of their newly-married daughters. Zahoor says this has become a practice that many affluent families have now taken to.

"Normally, a well-to-do father sends anything between five to seven kilograms of harisa to his daughter's new home. We dress such gifts with kebabs to make the dish more attractive", said the owner of the shop at Jamalatta.

A story still told to children by parents is about an Afghan governor of Kashmir in the past who liked the dish so much that he did not know where to stop. He simply over-ate himself to death.