A Sugar Crash: Dietitians on the Snacks That Fuelled the Iranian Nuclear Deal 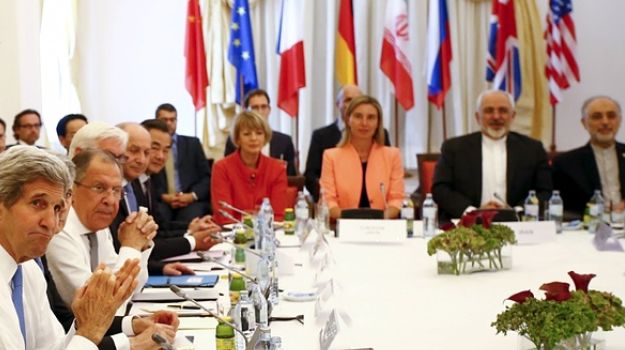 John Kerry (left) and other foreign ministers, who apparently snacked on Strawberry Twizzlers and Cheestrings among other things. Photograph: Leonhard Foeger/Reuters​

The foreign ministers brought more than diplomacy to the table. They also came with their favourites snacks – Strawberry Twizzlers, Cheestrings, green raisins, Mozart balls and more

Strawberry Twizzlers helped to fuel this week's Iran nuclear agreement. It may sound like a joke, but the table around which the diplomats sat in their grand Vienna hotel was strewn with wrappers from several kilograms of Twizzlers and Cheestrings. The Guardian's diplomatic editor Julian Borger revealed the negotiating teams' arsenal of snacks in this report of the marathon negotiations. The diplomats relied on a wide range of such snacks to power themselves through 18 days of talks. So who ate what, and how did they benefit?

This American classic, made by Hershey's, brought partisan snacking to the US side of the table. Twizzlers are high in carbohydrates, which quickly convert to glucose - brain food. But Jo Travers, a London-based nutritionist, sounds uncertain. "One would be all right," she says doubtfully. The US delegation ate 10lb. Is that a problem? "Your body responds by releasing masses of insulin to bring the blood sugar level back down,"Travers says. "Then you're stuck with no sugar again. That's a sugar crash." Surely John Kerry knows this is no way to repair a broken femur.

The US diplomats' snacking regime is basically a hastily assembled kids' lunchbox. "I can sort of see the benefits,"says Travers. "They contain calcium and some fat, so they would be quite good at making you feel full for a while." She would be happier if they ate their Cheestrings with oatcakes or wholemeal bread.

These raise questions. Crucially, were they ready to eat, or did Iranian foreign minister, Mohammad Javad Zarif, and co muffle the crack of shells between their palms, beneath the table? Pistachios are a diplomatic minefield. Where did the shells end up? Plus, that noise can become annoying, or sound trivialising if it coincides with crucial moments. On the positive side, "shelling would slow down their speed of eating," says Elaine Allerton of the Association of UK Dietitians. "If people eat quickly, they might take in more air, which could lead to belching."

The key word here is "green". Green raisins are likely to be Iranian. Other raisins are likely to be American. (This is an admittedly broad-brush picture of the international raisin export market.) Green raisins have been dried in the shade rather than the sun, which might help to keep tempers cool (anecdotally unproven). "Dried fruit is instant energy," says Allerton. Brought by... the Iranians.

Defence secretary Phil Hammond took these to the negotiating table when he returned from trips to London. "High in sugar, high in fat, high in carbohydrates...You're not going to just eat one, are you," says Travers. "But sometimes you need something that tastes really nice. Chocolate-chip cookies are brilliant for keeping the spirits up."

"Out of the snacks here, this is the best one," says Allerton. "Dried fruit gives you an energy high, whereas the nuts would be rich in fats and protein, keeping you full for longer." The US delegation consumed 30lb of mixed fruit and nuts, though it would be nice to think they offered them round to other countries.

Freely offered by the Austrian hosts at the Palais Coburg hotel. These contain chocolate, nuts and... small quantities of cherry liqueur. So let's hope they didn't go overboard - and that they all visit the dentist soon.